Dec 24, 2016 10:09 PM PHT
Agence France-Presse
Facebook Twitter Copy URL
Copied
They are members of a faction of the Jamayetul Mujahideen Bangladesh, blamed for a wave of attacks including the July 1 massacre at a Dhaka restaurant, says a police spokesman 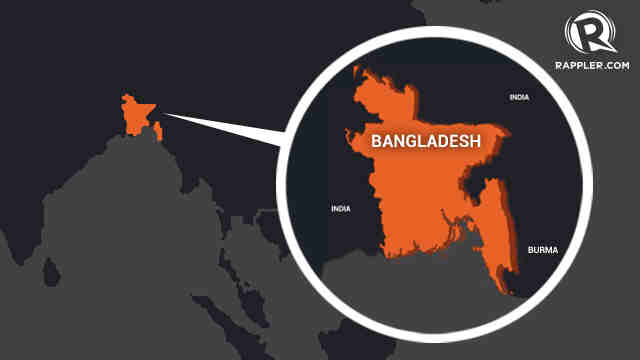 Security forces, acting on a tip, besieged a flat in Dhaka’s Dakshinkhan neighborhood for more than 12 hours, with the operation coming to an end at around 4.00 pm (1000 GMT or 6 pm Philippine time) after officers exchanged gunfire with the militants, police said.

A child was also injured when one of the militants, a woman who was holding the child, exploded a vest she was wearing.

He said the two were members of a faction of the JMB (Jamayetul Mujahideen Bangladesh), the banned extremist outfit blamed for a wave of attacks including the July 1 massacre at a Dhaka restaurant in which 22 people, mostly foreigners, were killed.

Dhaka police chief Asaduzzaman Mia said the female militant exploded the vest in an attempt to target the security forces.

“The woman came forward and tried to come near police… she conducted suicide blast,” Mia told reporters after the raid.

Bangladesh has been reeling from a wave of attacks on foreigners, rights activists and members of religious minorities.

Since the July massacre, security forces have shot dead nearly 50 Islamist militants including a Canadian of Bangladeshi origin who was accused of masterminding the restaurant attack. – Rappler.com