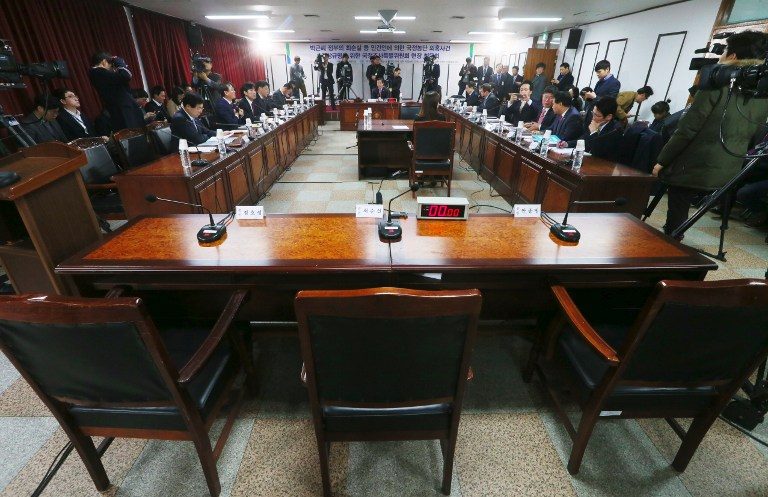 SEOUL, South Korea (UPDATED) – A handful of South Korean lawmakers on Monday, December 26, finally got to question the woman at the heart of the impeachment crisis surrounding President Park Geun-Hye, after she snubbed a televised hearing at her detention center.

Choi Soon-Sil, a long-time friend of the president, has repeatedly ignored several summons to appear before a parliamentary committee probing a corruption scandal that triggered Park’s impeachment earlier this month.

So the lawmakers came to her, with the committee organizing a special hearing Monday morning – with TV cameras – inside the detention facility where Choi is awaiting trial on charges of extortion and abuse of power.

Choi initially refused to leave her cell, but eventually agreed to meet 8 selected members of the committee behind closed doors.

Citing the lawmakers, Yonhap news agency reported that Choi denied all her charges, including allegations that she colluded with the president and set up two dubious foundations that were later used for her personal gain.

Choi, however, said she was prepared to serve a life sentence and apologized to the public for “causing confusion”, according to Yonhap.

She said she was feeling “dizzy” both physically and mentally and refused to answer most of the lawmakers’ questions during the meeting that lasted nearly 3 hours, Yonhap said.

There are no legal grounds for forcing witnesses to attend a parliamentary hearing, although they can be held in contempt and face a maximum 5-year prison term for not doing so.

The National Assembly voted to impeach Park earlier this month, stripping away her substantial executive powers.

She remains president in name, pending a decision by the Constitutional Court on whether to ratify parliament’s impeachment motion.

Earlier Monday, prosecutors seized documents during an early-morning raid on the central Seoul residence of Kim Ki-Choon, who served as Park’s chief of staff between 2013-15.

Kim has a long association with Park’s family, having also served her father – the late military strongman Park Chung-Hee who led the country for 18 years after seizing power in a 1961 military coup.

Those close ties have led to allegations that he must have been aware of the inappropriate influence that Choi – dubbed a “female Rasputin” by the local media – wielded over the president.

Park allegedly leaked confidential documents to her friend, and allowed her to meddle in state affairs – including the appointments of senior officials. – Rappler.com