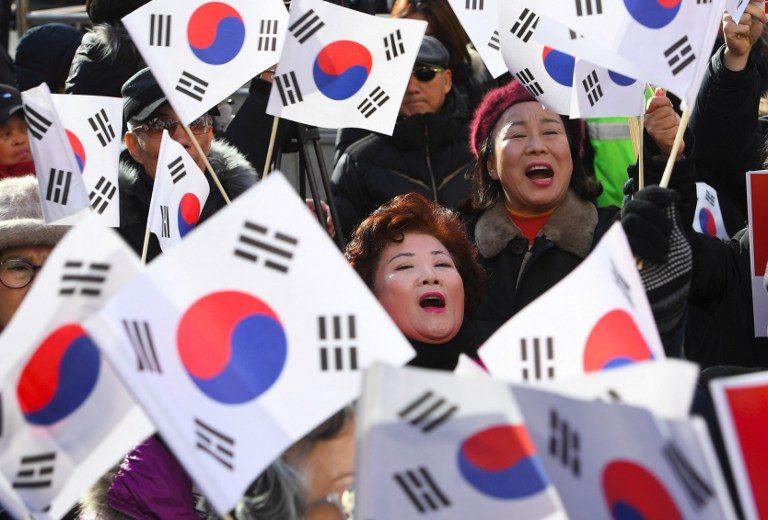 Facebook Twitter Copy URL
Copied
A group of 29 lawmakers left the ruling Saenuri Party, arguing that its leadership refuses to embrace reforms despite the political crisis fuelled by the corruption scandal that has engulfed Park Geun-Hye

A group of 29 lawmakers left the ruling Saenuri Party, arguing that its leadership refuses to embrace reforms despite the political crisis fuelled by the corruption scandal that has engulfed Park.

Their departure left the party with 99 seats in the 300-seat National Assembly, relegating it to second place behind the liberal Democratic Party.

In a statement, they accused the ruling party of defending Park, branding her as the “worst-ever” offender against constitutional order.

“Our departure will provide momentum to turn the country’s tragic incident – the impeachment of its president – into chances for the development of democracy”, the dissident group said.

More than 60 Saenuri lawmakers crossed party lines to join opposition parties in passing a motion to impeach Park this month.

The case is now being considered by the constitutional court, which has up to 180 days to rule on the validity of the impeachment that charged Park with multiple criminal and constitutional violations – ranging from bribery to abuse of power.

The next presidential election is slated for December 2017, but if justices confirm impeachment, Park will be permanently removed and elections must be held within 60 days – meaning a ballot could be held as early as late March.

The Saenuri Party split could be problematic for one frontrunner – outgoing UN Secretary General Ban Ki-Moon.

He had been widely expected to compete as a center-right candidate on the Saenuri ticket but is now without an obvious platform to launch and run his campaign.

The 72-year-old last week strongly hinted he will jump into the presidential race, saying he was willing to devote himself to developing South Korea.

An opinion poll last week showed Ban was neck and neck with Democratic Party hopeful Moon Jae-In, each with a 23% support.

It remains unclear whether Ban will join the Saenuri Party or the emerging conservative party.

Park is accused of colluding with her friend Choi Soon-Sil to strong-arm large companies like Samsung into handing over tens of millions of dollars to two dubious foundations Choi allegedly controlled and plundered.

Park also allegedly ordered aides to leak state documents to Choi, who has no official title or security clearance, allowing her to meddle in some state affairs including the appointment of top officials.

Choi, who is said to have had a “Rasputin-like” influence over the president, has denied all charges against her. – Rappler.com