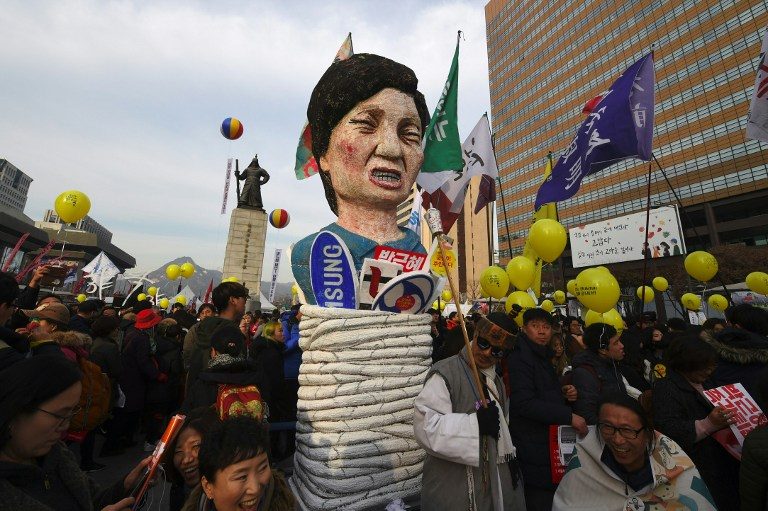 SEOUL, South Korea – South Korean investigators on Wednesday, December 28, detained the state-run pension fund chief as they expand a probe into a corruption scandal to determine whether President Park Geun-Hye took bribes from conglomerates including Samsung.

National Pension Service chief Moon Hyung-Pyo, who served as health minister until August 2015, is accused of pressuring the state pension fund to back the merger.

Moon has denied all allegations but was taken into emergency detention after a key NPS official told investigators he was pressured by the health ministry to vote for the merger, Yonhap news agency said.

Investigators have to decide whether to seek a warrant to formally arrest Moon before the emergency detention period expires in 48 hours.

The merger of Samsung units Cheil Industries and Samsung C&T last year was seen as a crucial step to ensure a smooth father-to-son power transfer to Lee Jae-Yong, scion of Samsung’s founding family.

It was criticized by many who said it undervalued Samsung C&T stock.

But the NPS – a major Samsung shareholder – voted in favor of the deal.

Last week, investigators searched around 10 places including NPS offices and the health ministry, which oversees the fund.

The special prosecutor – appointed by lawmakers – has taken the case over from state prosecutors.

Choi has been formally indicted on charges of abuse of power and coercion.

She is accused of leveraging her personal relationship with Park to coerce donations from big firms like Samsung to two non-profit foundations which was then used for Choi’s personal gain.

Prosecutors say Park colluded with Choi to extract money from the firms and will question the president as a subject in a criminal investigation. – Rappler.com