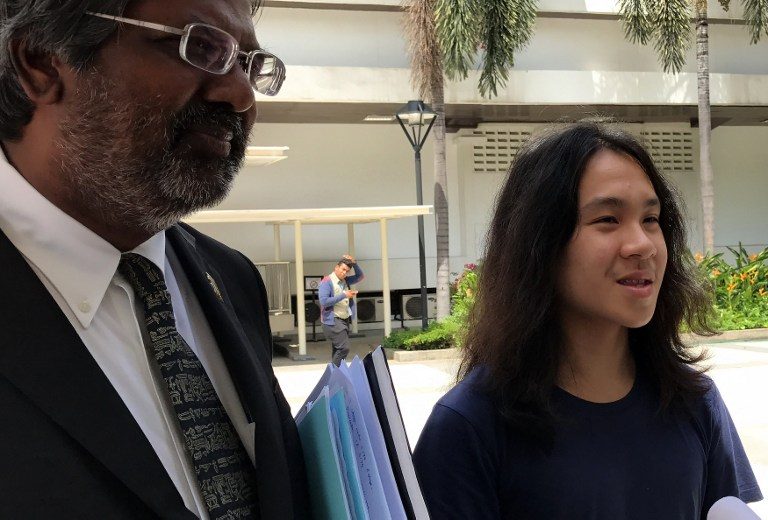 Facebook Twitter Copy URL
Copied
Amos Yee, 18, a filmmaker turned activist who has been repeatedly jailed in Singapore for his controversial videos, is detained by US authorities since arriving at Chicago's airport early December

SINGAPORE – A Singaporean teenager who became notorious for profanity-laced attacks on the city’s revered late leader Lee Kuan Yew is seeking political asylum in the US, his lawyers said Thursday.

Amos Yee, 18, a filmmaker turned activist who has been repeatedly jailed in Singapore for his controversial videos, has been detained by US authorities since he arrived at Chicago’s airport early December.

“Soon his case will be referred to an immigration judge for a hearing on his eligibility for asylum,” Yee’s lawyers Grossman Law said in a statement posted on Facebook.

Yee will have to undergo a “Credible Fear Interview” when US officials will determine whether he risks persecution or torture in Singapore, his lawyer Sandra Grossman told the South China Morning Post.

Yee was in high spirits despite being detained and was seeking US asylum because America is a “safe space” where free speech is not policed, Melissa Chen, a US-based Singaporean who has been helping Yee with his asylum bid, said in a Facebook post.

Yee’s mother Mary Toh confirmed his detention and US asylum bid, adding: “the matter is now with his lawyers.”

Singapore’s foreign ministry did not immediately respond to a request for comment.

Singapore “has subjected Amos Yee to a sustained pattern of persecution, including intimidation, arrest and imprisonment, for publicly expressing his views on politics and religion,” Robertson said in a statement.

Yee, who won a filmmaking award at 13, posted an expletive-laden video in March 2015 attacking Lee amid an outpouring of grief over the founding prime minister’s death that same week.

In the eight-minute video, Yee compared Lee to Jesus, saying “they are both power-hungry and malicious but deceive others into thinking they are compassionate and kind”.

He was jailed for four weeks for hurting the religious feelings of Christians and for posting an obscene image of Lee and former British Prime Minister Margaret Thatcher. He served 50 days, including penalties for violating bail conditions.

In September, Yee was jailed for six weeks for insulting Muslims and Christians in a series of videos posted online, which included images of him disrespecting the Koran.

The videos were watched hundreds of thousands of times before they were taken down from Yee’s YouTube page. – Rappler.com