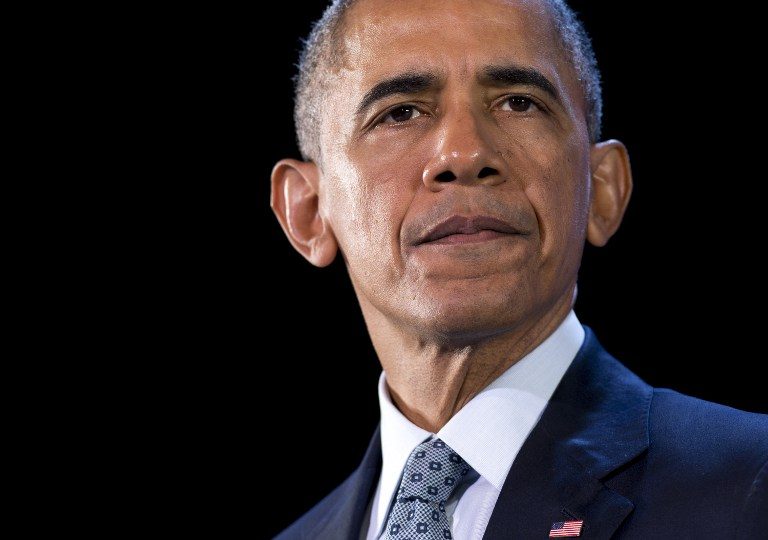 WASHINGTON, United States – President Barack Obama on Thursday, December 29, unleashed a barrage of retaliatory measures against Moscow for meddling in the US election, imposing sanctions on two intelligence agencies, expelling 35 agents and shuttering two Russian compounds inside the United States.

Making good on a promise to punish Vladimir Putin’s government for allegedly trying to tilt the 2016 election in Donald Trump’s favor, Obama unveiled a broad range of steps that will inflame tensions with both Moscow and the president-elect.

US intelligence had concluded that a hack-and-release of Democratic Party and Hillary Clinton staff emails was ordered by the Kremlin and was designed to put the Republican real estate mogul in the Oval Office.

“I have ordered a number of actions in response to the Russian government’s aggressive harassment of US officials and cyber operations aimed at the US election,” Obama said in a statement.

Trump said that while he believes the US should “move on to bigger and better things,” he would meet with intelligence leaders next week for a briefing on the situation.

In response to the hacks – dubbed “Grizzly Steppe” by US officials — Obama announced sanctions against Russia’s military intelligence agency, known as GRU, and the FSB – the KGB’s successor.

The 35 Russian intelligence operatives – based at the Russian embassy in Washington and the consulate in San Francisco – have been declared “persona non grata” and ordered to leave the country within 72 hours.

The latter facility, a summer house a short drive from the US capital, was once featured in a Washington lifestyle magazine and was described as a stately home surrounded by lush gardens on the banks of the Chester River, with an “impressive collection of German and Hungarian porcelains.”

The US government said it is now used “for intelligence-related purposes.”

“These actions follow repeated private and public warnings that we have issued to the Russian government, and are a necessary and appropriate response to efforts to harm US interests in violation of established international norms of behavior,” he said.

Those warnings, officials said, included a personal message from Obama to Putin when the two leaders met briefly in Hangzhou, China in September.

Moscow quickly rejected US accusations of cyber-interference as “unfounded,” and vowed to retaliate.

He said Moscow would “react in an adequate manner based on the principles of reciprocity.”

US officials said they were aware of reports that Moscow may have ordered the closure of the Anglo-American School in the Russian capital — attended by many children of diplomats – but they could not confirm those reports.

Trump has questioned whether Russia really tipped the electoral scale, painting Obama’s accusations as a thinly veiled effort by a Democratic president to delegitimize a Republican victory.

While Trump has already received intelligence briefings about the election and substantial evidence is in the public sphere, his pledge to meet with intelligence chiefs could provide a face-saving opportunity to further soften his stance.

Obama pointedly stated that “all Americans should be alarmed by Russia’s actions.”

The timing of his actions leave Trump and Moscow in a difficult position.

Any attempt by the mogul-turned-politico to reverse Obama’s sanctions once he takes office on January 20 would be widely seen as condoning Russian interference.

That proposition was further complicated by Obama linking the sanctions to harassment of US diplomats in Moscow, which Washington described as “unprecedented” in the post-Cold War era.

“These are executive actions,” said a senior Obama administration official.

Trump’s fellow Republicans are also limiting his room for maneuver, increasingly distancing themselves from his pro-Russian stance.

“Russia does not share America’s interests. In fact, it has consistently sought to undermine them,” he said.

Senior lawmakers on both sides of the political aisle have called for a congressional probe into Russia’s actions. Obama said Congress would receive a report in the coming days about Russia’s cyber-meddling.

Obama’s actions will also force Putin to weigh harsh retaliatory steps and the chance it could endanger an expected cooling of tensions under Trump.

Relations between Washington and Moscow are at their worst since the end of the Cold War, and Obama had previously imposed sanctions over Russia’s interventions in Syria and Ukraine.

US officials played down the impact that sanctions against the GRU and the FSB could have on intelligence-sharing on issues like counterterrorism, saying the cooperation was already limited.

Both agencies will face sanctions, along with four individual GRU officers including agency chief Igor Korobov.

In addition, the US Treasury slapped sanctions on two individuals, Evgeniy Bogachev and Aleksey Belan, for “involvement in malicious cyber-enabled activities.”

The sanctions freeze any assets they may have in the United States and blocks US companies from doing business with them.

The US government is also declassifying technical information on Russian cyber activity to help companies defend against future attacks.

“The United States and friends and allies around the world must work together to oppose Russia’s efforts to undermine established international norms of behavior and interfere with democratic governance,” Obama said.

That reflects growing concerns that Russia could target upcoming elections in France, Germany and the Netherlands. – Rappler.com