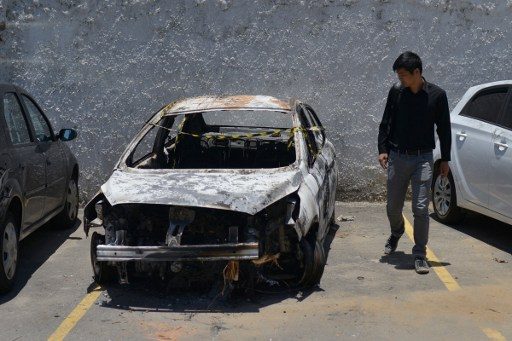 RIO DE JANEIRO, Brazil (3rd UPDATE) – Greece’s ambassador to Brazil was murdered in a plot hatched by his Brazilian wife and her police officer lover, who confessed to the crime, officials said Friday, December 30.

Amiridis’s charred body was found Thursday in Rio in his burned-out rental car, a day after his wife, Francoise de Souza Oliveira, declared him missing.

Oliveira, 40, and Moreira, 29, both admitted to having an affair, police said.

The pair are in custody, along with Moreira’s 24-year-old cousin, Eduardo Tedeschi, who allegedly also took part.

According to the homicide division chief, Oliveira denied participating in the murder itself, but confessed she knew of the crime.

Amiridis, who was named ambassador this year, had been on a family vacation with his wife in the north of Rio de Janeiro since December 21. They had been due to fly back to the capital Brasilia on January 9.

His wife had originally told police that he had left the Rio apartment they were staying in, taken the car, and not returned.

But her version had contradictions, and after Amiridis’s body was found in the burned-out car under a bridge, police took Oliveira in for more questioning, and also detained Moreira.

Traces of blood were reportedly found on a sofa in the apartment Amiridis and Oliveira had been using, leading investigators to believe he had been killed there, then his body was placed in the rental car and driven to the spot it was found.

Pontes said that Oliveira had offered Tedeschi the equivalent of $25,000 to help with murdering the ambassador.

Moreira acknowledged that he and Amiridis had had a physical fight, and that he had strangled the ambassador in self-defense.

Amiridis had previously served Greece’s consul general in Rio from 2001 to 2004, where he met Oliveira.

The couple have a 10-year-old daughter.

A Greek police team was due to leave Friday for Brazil to take part in the investigation, while Greece’s ambassador in Argentina was headed to Brasilia, Athens said.

In a letter to the Greek government, Brazilian President Michel Temer sent his condolences and conveyed his government’s commitment to conducting a “rigorous” investigation.

“The Brazilian people do not accept this type of behavior and we apologize to the entire Greek population,” said the director of Rio’s homicide division, Rivaldo Barbosa.

He called the murder “isolated” and a “crime of passion” that he said has nothing to do with Rio’s elevated levels of violence.

Rio de Janeiro, though picturesque, has a reputation as a dangerous place. The 2016 Olympic host city has seen crime rates soar in recent months, fueled by drug gang violence.

Hit hard by Brazil’s worst recession in more than a century, Rio de Janeiro state is facing bankruptcy and struggling to deal with the violent crime that has long dogged the area. – Rappler.com