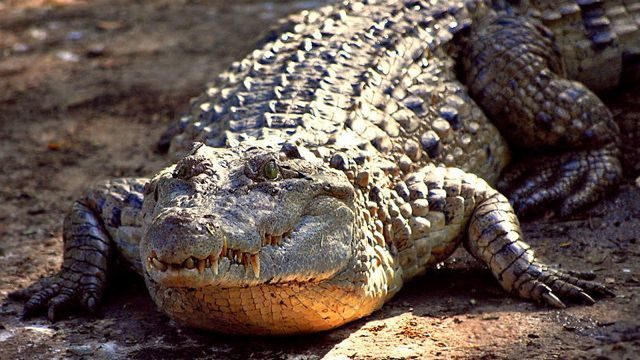 BANGKOK, Thailand – A French tourist was bitten by a crocodile inside a Thai national park as she tried to get close to the fearsome animal to take a selfie, an official said on Monday.

“She wanted to take selfie with the crocodile who was lying down near a stream,” a park official told AFP, asking not to be named because he did not have the authority to speak to the media.

“It was startled and bit her on her on the leg.”

The official said two crocodiles had made their home on that particular section of the park for years with warning signs laid out.

“I guess that she wanted to see it for real,” he added.

Local media posted pictures of park rangers dressed in camouflage carrying the 47-year-old victim strapped to a stretcher, a thick bandage wrapped around her knee.

Another shot showed a ranger pointing to a pool of blood close to a sign saying in Thai and English “Danger Crocodile No Swimming”.

The victim was taken to hospital for treatment and is expected to recover.

Siamese crocodiles were once ubiquitous across South East Asia but their populations have been decimated in the last century by hunting and habitat loss.

They are currently listed as critically endangered on the IUCN’s red list.

In Thailand there are just a handful of wild populations left in central and western national parks.

Most tourists will only see them in crocodile parks, many of which have been criticized by animal rights groups for controversial feeding practices. – Rappler.com