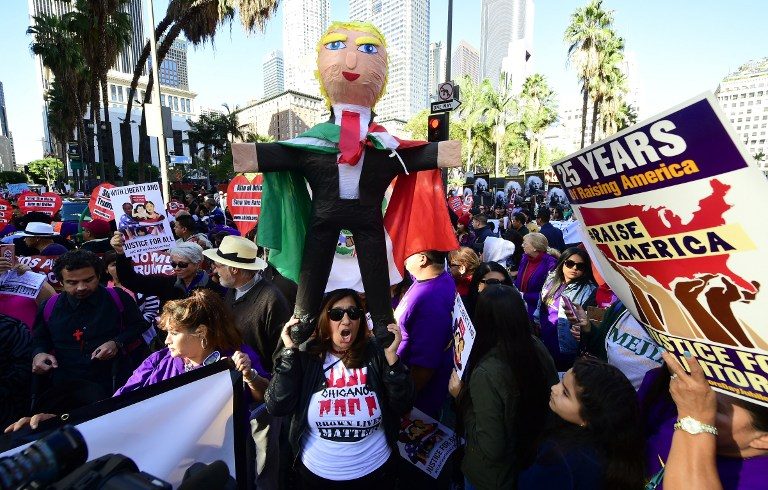 LOS ANGELES, USA – California, home to many foreigners without residence papers, is girding to fight any attempt by President-elect Donald Trump to expel them.

Trump, who takes office January 20, has vowed to deport from the country as many as 3 million immigrants with criminal records and build a wall along the border with Mexico.

But several so-called sanctuary cities in California – ones that intentionally avoid prosecuting undocumented foreigners for violations of federal immigration policy – are beginning to dig in. The state is home to 2.8 million of undocumented immigrants.

During the presidential campaign, Trump vowed to cut off federal funds for sanctuary cities, of which there are an estimated 300 in the United States.

But city authorities seem to have no intention of supporting any anti-immigrant initiative by the incoming government.

Advocates say protecting undocumented immigrants from deportation and other punishments encourages them to report crimes, enroll in school and seek healthcare.

Los Angeles Mayor Eric Garcetti wants to open a $10 million fund to provide free legal assistance to undocumented foreigners, most of whom are Hispanic.

Xavier Becerra, liberal Governor Jerry Brown’s nominee for state attorney general, is the son of Mexican immigrants and the first Latino to hold that post.

“If you want to take on a forward-leaning state that is prepared to defend its rights and interests, then come at us,” said Becerra, whom the press bills as Brown’s attack dog.

Brown has also vowed to oppose any attempt by Trump to change California policy on climate change, labor law and immigration.

The state assembly, controlled by Democrats, has approved a resolution urging Trump and the Republican-led US Congress to develop reasonable immigration policy and refrain from mass deportations.

Los Angeles police chief Charlie Beck has said that his officers would not take part in any federal operation to deport undocumented foreigners.

“We are not going to engage in law enforcement activities solely based on somebody’s immigration status. We are not going to work in conjunction with Homeland Security on deportation efforts. That is not our job, nor will I make it our job,” Beck said.

However, city officials are powerless to stop federal raids against undocumented immigrants.

In 2015, of 235,413 deportees (59 percent of them with a criminal record), 6,869 were caught in Los Angeles, according to data from US Immigration and Customs Enforcement.

Ron Gochez, of the immigrant advocacy group Union del Barrio, said he appreciates the efforts of local authorities but sees them as symbolic.

“No one can stop them. We don’t want people to let their guard down because of these speeches and stop protecting themselves,” Gochez said.

Gochez, an American of Salvadoran and Mexican origin, notes that 2.5 million people were deported over the 8 years that Barack Obama has been president – more than under any other US president.

“No matter who is in the White House, the immigrants are always under attack,” he said.

In 2012 Obama promised comprehensive immigration reform but it got blocked in the Republican-led Congress.

Through an executive order, he approved a program to let foreigners brought into America illegally as children to study, work and get a driver’s license.

Trump threatened to scrap that so-called DACA program, although after winning the election he changed his tune and said, without giving details, “We’re going to work something out that’s going to make people happy and proud.”

With Becerra as attorney general, California could play the same role that heavily Republican Texas did during the eight years of the Obama administration, with lawsuits on issues such as health care, the environment and immigration.

In the meantime, immigrants in California are scared as they wait to see what Trump’s policies will actually be.

Union del Barrio has been offering free information sessions for undocumented foreigners. The Department of Homeland Security says there are an estimated 11 million in the country, 60 percent of them Mexicans.

Anti-Trump rallies have been called for January 20 – inauguration day – in several cities including Los Angeles.

“We are not going to sit by idly, we are going to be organized,” Gochez told Agence France-Presse. “If we do not defend ourselves, who will?” – Rappler.com