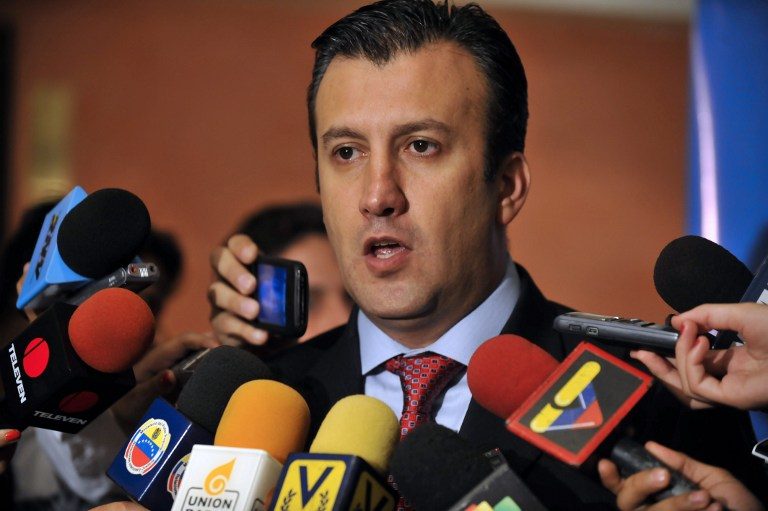 Facebook Twitter Copy URL
Copied
Tareck El Aissami, 42, is named vice president, who would take over as head of state if Nicolas Maduro were removed from office this year as the opposition demands

CARACAS, Venezuela – Venezuela’s leader Nicolas Maduro on Wednesday, January 4, named a new vice president, who would take over as head of state if Maduro were removed from office this year as the opposition demands.

Maduro told a televised cabinet meeting that he had named Tareck El Aissami, 42, a powerful state governor, to the post.

El Assaimi is governor of the violent northern state of Aragua and served as interior and justice minister under Maduro’s late predecessor Hugo Chavez.

“I have appointed Tareck El Aissami executive vice-president of the republic so that he can take up the role from 2017 to 2018 with his youth, experience, commitment and courage,” Maduro said.

The center-right opposition has been demanding a popular vote on removing Maduro from office.

It blames him for an economic crisis that has prompted shortages of food and medicine and deadly riots.

The opposition has missed the deadline for sparking fresh elections by a referendum before Maduro’s term ends in 2019, however.

Under constitutional rules, if Maduro lost a referendum held after January 10 this year, he could pass power to his handpicked vice-president.

The MUD opposition coalition is scheduled to announce its latest plans when its lawmakers gather in the legislature on Thursday, January 6.

It has not said whether it will resume its drive for a referendum against Maduro.

Courts and electoral authorities in October blocked the opposition’s bid to hold a recall referendum.

The MUD alleges that Maduro controls the Supreme Court and electoral board through his allies.

Maduro also has the public backing of the military high command.

Maduro says the crisis is the result of a US-backed capitalist conspiracy.

Some opposition leaders sat down in late 2016 to talks with Maduro’s government.

Others branded the dialogue a ploy to defuse protests against the government and its “Bolivarian revolution” launched by Chavez.

The opposition walked out of the talks last month, accusing the government of breaking its promises.

The MUD insists that Venezuelans be allowed to vote on whether Maduro should stay in power.

He has refused to allow any such vote and stuck to his defiant line on Wednesday.

He said “2017 will be the first year of the recovery and the expansion of the Bolivarian revolution on all fronts.”

He was a junior security minister before holding the interior and justice post for 4 years.

He then became governor of Aragua, considered the most dangerous state in a South American country plagued by violence.

“I told him, Tareck, get to work day and night working for the security of the people,” Maduro said on Wednesday.