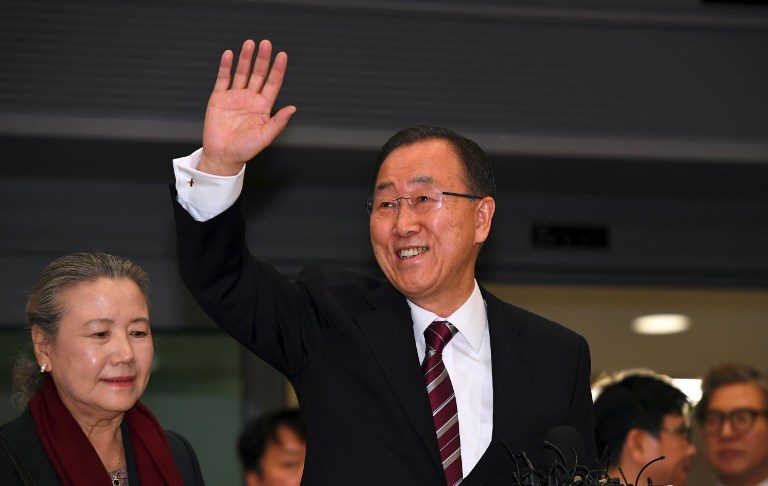 Facebook Twitter Copy URL
Copied
Speaking before a crowd of hundreds at Incheon International Airport, Ban says he was prepared to meet with the public this week before making a 'selfless decision'

“I have seriously considered and thought about how I can put my experience and knowledge as a UN Security Council General to best use,” Ban said in televised remarks after his arrival.

Speaking before a crowd of hundreds at Incheon International Airport, Ban said he was prepared to meet with the public this week before making a “selfless decision.”

Ban’s return comes at a time of national uncertainty with tens of thousands of people marching in weekly protests demanding the permanent removal of scandal-hit Park, who was impeached by parliament last month over a corruption scandal.

If the Constitutional Court upholds the parliamentary vote, Park will be permanently removed and elections held within 60 days.

“It breaks my heart,” said Ban, referring to the ongoing political turmoil.

“We must never forget the people’s desire that was expressed on the streets.”

A career diplomat, Ban never joined any South Korean political party, although he served as foreign minister under the late liberal president Roh Moo-Hyun from 2004 to 2006.

It remains unclear whether Ban will join Park’s ruling Saenuri Party or the emerging conservative party.

The former UN secretary general has a 20.3 percent approval rating according to a poll released Thursday.

Further troubling his political aspirations, Ban’s younger brother and nephew were indicted in a US court this week over an alleged attempt to bribe a Middle Eastern official regarding the sale of a building in Vietnam.

However Ban has denied any involvement, saying he was “perplexed and embarrassed” by the situation. – Rappler.com