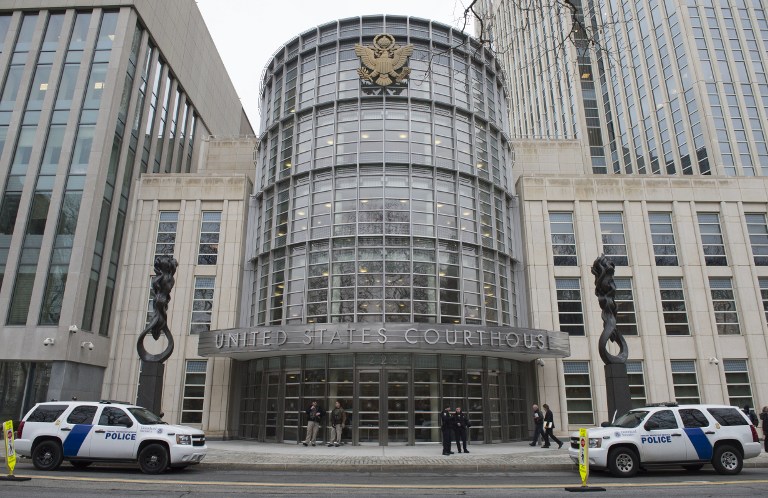 NEW YORK, USA – Mexican drug lord Joaquin “El Chapo” Guzman, one of the world’s most notorious criminals, pleaded not guilty in a US court Friday, January 20, to a raft of firearms, drug trafficking and conspiracy charges that could see him jailed for life.

Less than 24 hours after being extradited by Mexico, the 59-year-old drug baron looked tired as he stood in blue prison scrubs flanked by his US public defenders for the brief, 10-minute hearing in a federal court in Brooklyn.

US prosecutors say Guzman’s Sinaloa cartel is responsible for distributing hundreds of thousands of kilos of heroin, cocaine, methamphetamine and marijuana throughout the United States, reaping billions of dollars in profits.

They hailed his extradition as a milestone in efforts to bring Guzman to justice, rushing out the announcement in the final hours before Republican President Donald Trump took the oath of office.

It caps a Hollywood-worthy cat-and-mouse game between authorities and the slippery drug lord, who escaped spectacularly from prison twice – in a laundry cart in 2001 and through a tunnel under his shower in 2015.

His feats turned him into a legend of Mexico’s underworld, with musicians singing his praises in folk ballads, but his cartel controlled a massive international drugs distribution network and presided over deadly turf wars.

Guzman spoke softly in court on Friday, addressing Magistrate Judge James Orenstein in barely audible Spanish as “yes, sir” through an interpreter while holding his hands behind his back.

He has been slapped with a sweeping 17-count indictment that includes criminal enterprise dating back decades from 1989 to 2014, drug importation, illegal use of firearms and money laundering conspiracy.

“We enter a plea of not guilty on his behalf,” said one of his defenders.

It remains how quickly a trial will get underway in a massively complicated case spanning multiple jurisdictions. The next hearing was set for February 3.

If found guilty, Guzman stands to spend the rest of his life in a maximum security US prison. Prosecutors are also seeking to obtain a $14 billion criminal forfeiture order against him.

“He’s a man known for no other life than a life of crime, violence, death and destruction and now he’ll have to answer to that,” US Attorney Robert Capers told reporters on Friday.

The drug baron, whom US prosecutors said was known to carry a gold-plated AK-47 assault rifle and a diamond-encrusted handgun, had campaigned against extradition since being recaptured last January following his second jailbreak.

Mexico’s government said it agreed to extradite Guzman after the United States pledged not to seek the death penalty at his trial and had accepted a US request to impose additional charges against him.

But questions have also been raised over the timing. Trump, who takes office on Friday, has publicly clashed with Mexico over trade and immigration issues and has pledged to build a wall on the US-Mexican border.

One of Guzman’s lawyers, Silvia Delgado, told Milenio television that she was surprised, calling the extradition “illegal” with another petition pending.

Homeland Security Special Agent Angel Melendez gave a dramatic account of Guzman’s arrival at MacArthur Airport the night before and US authorities have stressed that Guzman will have no means of escaping a US prison.

“I assure you no tunnel will be built leading into his bathroom,” he added.

Prosecutors say Guzman rose to infamy after fending off competition from Colombian cartels to oversee a drug trafficking network from the Pacific to the Atlantic, keeping “an army of hitmen at the ready” to protect his empire.

He is charged in 6 indictments throughout the United States, and the Mexican foreign ministry had also approved extradition bids from California and Texas.

“Guzman’s destructive and murderous rise as an international narcotics trafficker, is akin to that of a small cancerous tumor that metastasized and grew into a full-blown scourge that for decades littered the streets of Mexico with the casualties of violent drug wars,” Capers said.

Guzman was first captured in Guatemala in 1993, only to escape from a maximum-security prison in 2001.

Mexican marines backed by the US Drug Enforcement Administration arrested him in 2014, but he escaped again just 17 months later.

His henchmen dug a 1.5-kilometer (one-mile) tunnel that opened into his cell’s shower at the Altiplano prison near Mexico City, allowing him to slip out and flee on a remodeled motorbike that was fitted on tracks.

Guzman was recaptured in January 2016.

Authorities said they tracked him down after Guzman held a clandestine meeting with US actor Sean Penn and Mexican-American actress Kate del Castillo, with whom he exchanged flirtatious text messages. (READ: The actor and the drug lord: How Sean Penn met ‘El Chapo’) – Rappler.com