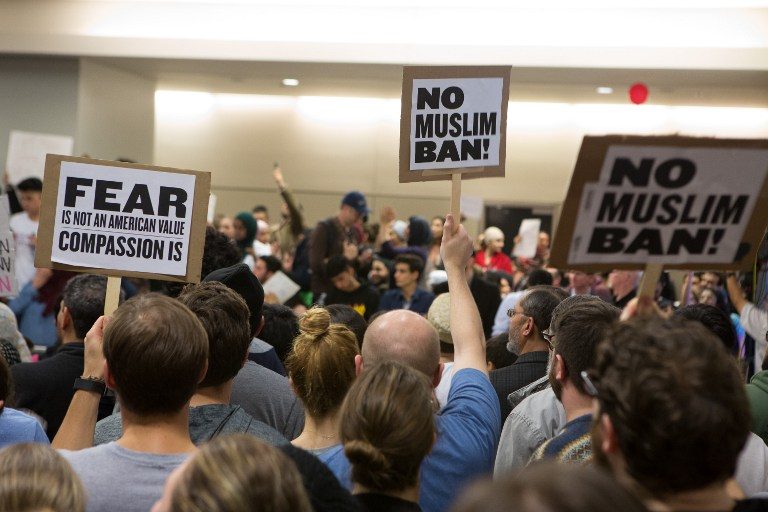 TEHRAN, Iran – Families split, a father unable to reach his son’s wedding and officials warning of a “gift to extremists” – US President Donald Trump’s visa ban on 7 Muslim countries has triggered shock and confusion among those affected.

“There is mass hysteria among the Iranian-American community – that’s no exaggeration,” said Saam Borhani, an attorney in Los Angeles.

He said clients were bombarding him with questions since Trump passed an executive order on Friday, January 27, suspending refugee arrivals and imposing tough controls on travelers from Iran, Iraq, Libya, Somalia, Sudan, Syria, and Yemen. (READ: Muslims barred from flights to U.S., as others detained)

With more than one million Iranians living in the United States, the restrictions have already caused chaos for students, businessmen and families. (READ: Trump originally asked for ‘Muslim ban’ says Giuliani)

“I have several clients impacted by the executive order – married couples whose spousal visas have been stopped, causing them to be separated. A father living in Iran who is unable to come to his son’s wedding in California,” said Borhani, who was himself born in the US to Iranian parents.

US State Department figures show Iran accounted for around a quarter of the 31,804 visas granted to citizens from the 7 countries last year.

Among thousands facing difficulties, an Iraqi family was barred in Cairo from taking their connecting flight to New York on Saturday, January 28.

“I had sold my house, my car, my furniture. I resigned from work and so did my wife. I took my children out of school,” Fuad Sharef, 51, told Agence France-Presse.

“Donald Trump destroyed my life. My family’s life. I used to think America was a state of institutions but it’s as though it’s a dictatorship,” he said.

An Iranian woman blocked from boarding at Tehran airport on Sunday, January 29, said she had waited 14 years for her green card.

“Even during the hostage crisis at the US embassy (in 1980), the US government didn’t issue such an order. They say the US is the cradle of liberty. I don’t see freedom in that country,” she said, asking not to be named.

The US embassy in Baghdad said on Facebook that dual nationals from the 7 countries would be barred from entering the United States, excluding those with American passports.

He asked why the list excluded Afghanistan, Pakistan, Qatar and Saudi Arabia, which he described as the “biggest sponsors of terrorism”.

Iran’s Foreign Minister Mohammad Javad Zarif said Sunday that Trump’s move “will be recorded in history as a great gift to extremists and their supporters.

His ministry said earlier that it would reciprocate with a ban on Americans entering the country, though it will not apply to those who already have a valid visa.

Meanwhile, Yemen’s Huthi rebels, who control the capital Sanaa, also criticized the ban, stating: “All attempts to classify Yemen and its citizens as a probable source for terrorism and extremism is illegal and illegitimate.”

Yemenis made up the largest contingent – 12,998 – of immigrants to the US last year from the 7 countries.

The situation has been complicated by a US federal judge, who ordered authorities on Saturday to stop deporting refugees and other travelers stuck at US airports.

“Uncertainty is the key word. Things are changing quickly and we’re trying to keep people updated,” said Borhani, the lawyer in LA.

Getting a visa was already tough for Iranians, who had to travel to Turkey or the United Arab Emirates for the nearest US embassy.

After rising hopes under former president Barack Obama that relations between Iran and the US were improving, Trump has thrown everything back up in the air, Borhani said.

“I don’t know what the future is going to hold, whether people here will be cut off permanently from their families in Iran. It’s very stressful.”

Meanwhile, Iran’s leading daily Hamshahri was headlined: “The United States has cut its relations with the Iranian people.”