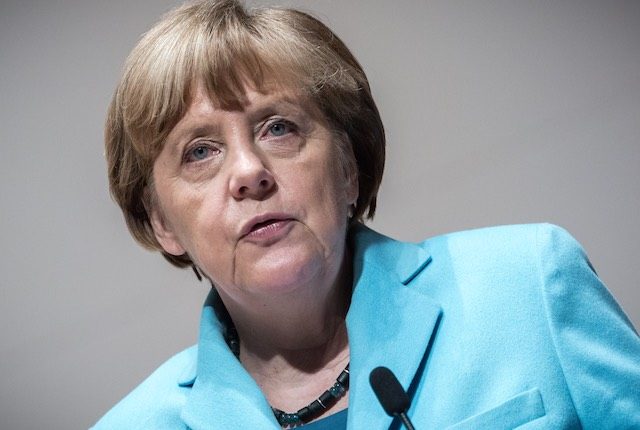 Facebook Twitter Copy URL
Copied
'Even in the necessarily resolute battle against terrorism it is not justified to place people from a certain origin or belief under general suspicion,' says the spokesman of German Chancellor Angela Merkel

BERLIN, Germany – German Chancellor Angela Merkel on Sunday, January 29 slammed the restrictions on immigration imposed by US President Donald Trump, saying it was “not justified” to target people based on their background or religion.

“The chancellor regrets the entry ban imposed by the US government against refugees and nationals from certain countries,” her spokesman Steffen Seibert said in a statement.

“She is convinced that even in the necessarily resolute battle against terrorism it is not justified to place people from a certain origin or belief under general suspicion,” he added. (READ: Muslim world shocked, outraged at U.S. visa ban)

The German government “will now examine the consequences” of the ban for German citizens with dual nationality affected by the decision, he added.

Trump has caused consternation at home and abroad after signing a sweeping executive order on Friday suspending refugee arrivals and barring visas for travellers from Iran, Iraq, Libya, Somalia, Sudan, Syria and Yemen for the next 3 months.

A federal judge on Saturday blocked part of the ban, ordering authorities to stop deporting refugees and other travellers stuck at US airports.

Merkel’s condemnation comes a day after she spoke by phone with the new US President, when they discussed a range of issues from relations with Russia to the situation in the Middle East and NATO.

Statements released by both sides after the call made no mention of the immigration ban, but Seibert on Sunday said Merkel had reminded the US billionaire of his human rights responsibilities.

“The Geneva Refugee Convention calls on the international community to take in war refugees on humanitarian grounds,” he said.

“The chancellor stressed this policy in yesterday’s phone call with the US president.”

In an interview with European media earlier this month, Trump said Merkel had made a “catastrophic mistake” in allowing a record number of migrants into Germany.

More than a million people, including hundreds of thousands from war-torn Syria, have arrived in Germany since the chancellor opened the country’s doors to those fleeing conflict and persecution in 2015.

Although the number of arrivals has slowed significantly in recent months, the influx has deeply divided Germans and fuelled a surge in support for the rightwing, anti-immigrant Alternative for Germany (AfD) party.

Even within Merkel’s own conservative CDU/CSU bloc, the policy has been controversial.

One of the fiercest critics in her own ranks, the head of the CDU’s Bavarian sister party CSU, Horst Seehofer, on Sunday praised Trump for sticking to his campaign pledges.

“He is implementing his campaign promises one by one with consistency and speed,” Seehofer told Germany’s bestselling Bild am Sonntag newspaper, while adding that he did not agree with all of the US leader’s decisions. – Rappler.com