Trump gets his secretary of state but other fights loom WASHINGTON DC, USA (UPDATED) – US President Donald Trump notched a victory Wednesday, February 1, with confirmation of Rex Tillerson as his secretary of state, but opposition Democrats girded for battle over several other nominations, including his pick for the US Supreme Court.

The Senate confirmed Tillerson, the former chief executive of oil giant ExxonMobil, by a vote of 56 to 43.

Democrats had argued Tillerson’s lack of government experience and ties to Russia would not serve US diplomatic interests well. But 4 Democrats ultimately joined all 52 Republicans voting in favor.

Once Tillerson is formally sworn in later Wednesday, Trump will have another key member of his national security team in place, along with his defense and homeland security secretaries and CIA director.

But battles loomed on Capitol Hill over other key nominees including education secretary-designate Betsy DeVos, with two Republicans crossing the aisle to oppose her, and Supreme Court pick Neil Gorsuch, who was introduced late Tuesday, January 31, at the White House.

“He’ll be approved very quickly,” Trump said Wednesday of Gorsuch, who would fill the seat on the high court left empty since conservative justice Antonin Scalia died in February 2016.

But that confidence belies what looks to be a tough confirmation fight in the Republican-controlled Senate, after Trump’s party refused for much of last year to fill the vacant court seat with Barack Obama’s nominee.

Trump is pushing for Senate Republicans led by Mitch McConnell to prevent a likely Democratic filibuster by using what is known as the “nuclear option.”

That procedure would change Senate rules to push Gorsuch through with a simple majority in the 100-seat chamber rather than a supermajority of 60 votes. Republicans hold 52 Senate seats.

“If we end up with that gridlock I would say, ‘If you can, Mitch, go nuclear,'” Trump said.

“The answer should not be to change the rules of the Senate, but to change the nominee to someone who can earn 60 votes,” Schumer said.

McConnell has not revealed whether he would seek to invoke the nuclear option.

The acrimonious row over Trump’s ban on travelers from 7 Muslim-majority countries has further complicated efforts to get his nominees confirmed.

Their boycott of votes on two Trump picks was dramatically overturned Wednesday when leaders of the Senate finance committee suspended the panel’s rules and approved the nominees for Treasury, Steven Mnuchin, and health, Tom Price, with no Democrats present. 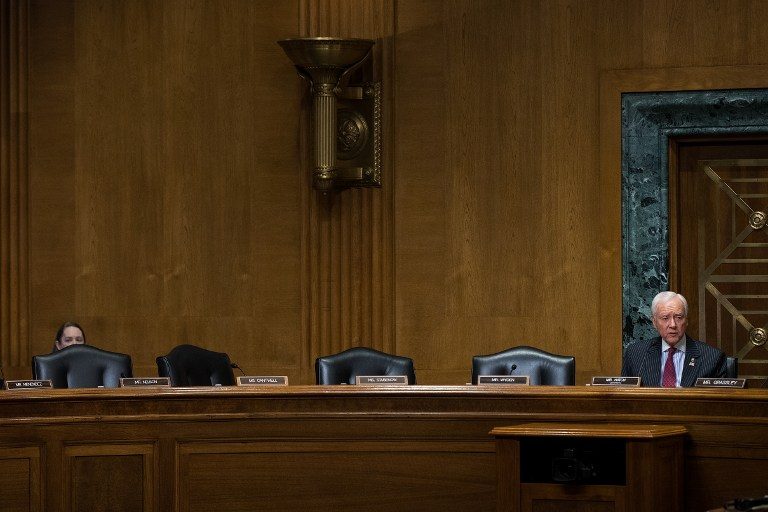 Democrats were not the only ones expressing concerns.

Two Senate Republicans, Susan Collins and Lisa Murkowski, on Wednesday announced their opposition to DeVos, bringing her nomination to the brink of defeat in what would be an embarrassment for the new president.

DeVos is a wealthy donor who has pushed hard for charter schools but whose position on public education has drawn criticism.

Despite the DeVos hiccup and Democratic obstruction, Trump’s attorney general pick Jeff Sessions was finally approved by the judiciary committee Wednesday following delays. A final confirmation vote has not been set.

The Supreme Court is likely to be a protracted fight.

If confirmed, Gorsuch would tilt the bench 5-to-4 in favor of the court’s conservative-leaning wing.

At 49, the silver-haired jurist with a flair for writing incisive rulings is the youngest nominee in a generation.

His appointment could have a major impact on cases ranging from business regulation to gender rights to gun control.

Gorsuch was a remarkably orthodox pick for a president who has scythed through norms and precedent during his brief time in office.

Like Scalia, Gorsuch is considered an “originalist” – guided in his legal thinking by the constitution’s original intent and meaning.

Democrats warn they will probe carefully to ensure that he is not intent on rewriting existing law.

Schumer charged that the new administration has shown “less respect for the rule of law than any in recent memory,” placing a “special burden on this nominee” to be an independent jurist.

The Supreme Court is the final arbiter of many of the most sensitive issues of US life and law. Its members are named to life terms.

Aware of the battle ahead, Gorsuch headed to Capitol Hill with Vice President Mike Pence to huddle with McConnell.

He also scheduled meetings with Democrats, including Senator Joe Manchin, one of the opposition centrists who could support Gorsuch’s nomination. – Rappler.com