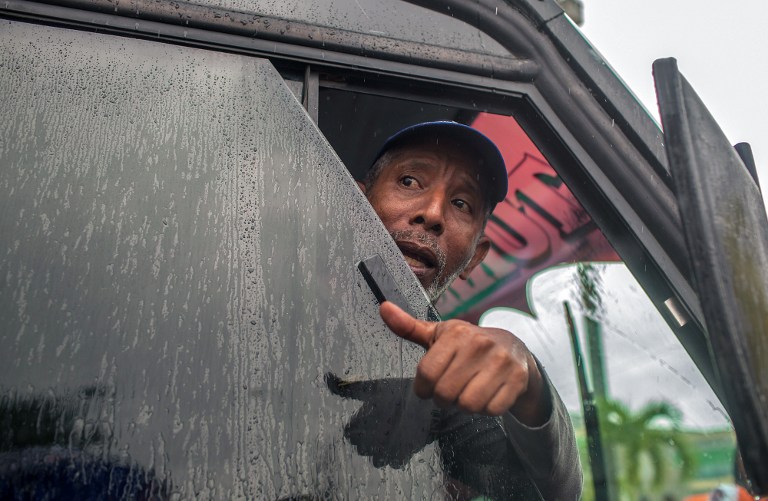 BOGOTA, Colombia – Colombia’s ELN guerrillas freed a hostage on Thursday, February 2, and the government released two rebel prisoners in exchange, clearing the way for peace talks to begin next week.

The government hopes talks with the one remaining active rebel group in Colombia will seal a “complete peace” to end Latin America’s last major armed conflict.

Odin Sanchez, a former lawmaker held captive since April 2016, was handed over to the Red Cross in the remote jungle region of Choco in western Colombia.

He was later welcomed by relatives and supporters waving signs and playing music in Quibdo, the regional capital.

“We have to unite to make those devils… join in a dialogue, so we can talk about peace and so they will release anyone else they may be holding,” he said.

The government in turn released the two jailed rebels, Nixon Cobos and Leivis Valero, in the mountains of Santander, in the northeast.

Described by their side as in poor health, they were met by ELN delegates on their release from prison.

“Welcome to freedom,” the force’s radio station ELN Ranpal said on Twitter, hailing the move as “a triumph for consensus between the sides.”

The exchange clears the way for formal talks to open Tuesday, February 7, in the Ecuadoran capital Quito.

The ELN, or National Liberation Army, is the last active rebel group in a country torn for more than half a century by a conflict that has killed more than 260,000 people and left 60,000 missing.

President Juan Manuel Santos is trying to end the fighting for good. He won the Nobel Peace Prize last year for his efforts.

His government is currently implementing a historic peace deal with the country’s largest rebel group, the Revolutionary Armed Forces of Colombia (FARC).

“This conflict is over,” he said, as he opened a summit of Nobel Peace Prize winners in Bogota.

“We did it. What seemed impossible, we made possible,” he said, vowing the ELN talks would lead to “complete peace.”

Sanchez voluntarily went into ELN custody last year to take the place of his brother Patrocinio, a former governor who had fallen ill after 3 years in captivity.

Patrocinio grew emotional talking about his brother’s sacrifice, in an interview with Agence France-Presse ahead of his release.

“I spent more than two years with my hands and feet chained, in an airtight room in total darkness.”

The ELN accuses the powerful Sanchez family of backing right-wing paramilitary groups in the Choco region, their political stronghold.

Patrocinio denied that claim, saying the ELN really only wanted ransom money. He said multiple ransom payments had been made, but declined to say how much.

Despite the hostage release, the negotiations look set to be tricky.

They will mark the 5th attempt to make peace with the ELN.

Both the FARC and ELN formed in 1964, and have funded themselves with ransom kidnappings and drug trafficking.

On Tuesday the rebels announced a new hostage seizure, a Colombian soldier they captured last week. The government condemned the abduction.

Santos had to revise the FARC accord after voters narrowly rejected it in a referendum last October.

Colombia’s territorial and ideological conflict has drawn in dozens of guerrilla and paramilitary groups, drug gangs and state forces over the decades.

Rights groups say massacres, rapes and other atrocities have been committed on all sides.

A teachers’ union in western Venezuela alleged on Thursday that the ELN had been luring Venezuelan minors with gifts to try to recruit them to its ranks in an area around the two countries’ border.