No other countries eyed for travel ban, U.S. says 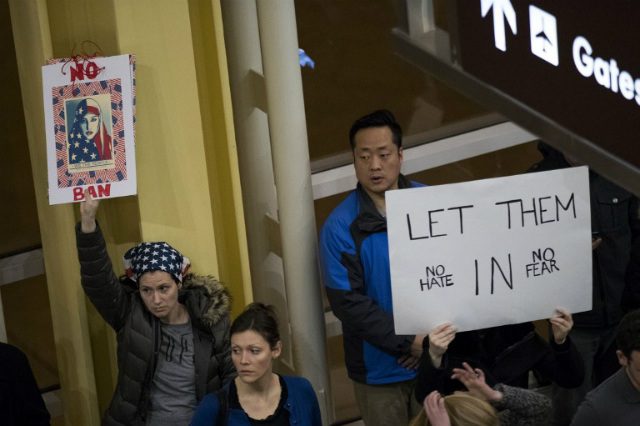 Facebook Twitter Copy URL
Copied
The US says this is 'contrary to false reports' that a draft order by US President Donald Trump includes other countries, including the Philippines, in the travel ban

LOS ANGELES, USA – The United States denied reports that it is planning to include more countries, including the Philippines, in its controversial ban on the entry of nationals from 7 mainly Muslim countries.

“Importantly, these 7 countries are the only countries to which the pause on entry applies. No other countries face such treatment,” the Department of Homeland Security (DHS) said in a statement Friday, February 3.

“Nor have any other countries been identified as warranting future inclusion at this time, contrary to false reports,” the DHS added.

The DHS issued this statement after Hammond Law Group LLC, a 26-year-old law firm in the US, said a revised executive order by US President Donald Trump might include the southern Philippines in the travel ban.

The American Immigration Lawyers Association (AILA) had earlier refuted the claim of Hammond Law Group, stirring confusion about the issue.

Explaining the travel ban, the DHS added on Friday: “To ensure that the US government can conduct a thorough analysis of the national security risks faced by our immigration system, the executive order imposes a 90-day pause on the entry into the United States of nationals from Iraq, Syria, Sudan, Iran, Somalia, Libya, and Yemen.”

“This pause does not apply to lawful permanent residents, dual citizens with passports from a country other than the 7 listed, or those traveling on diplomatic, NATO, or UN visas. Special immigrant visa holders who are nationals of these 7 countries may board US-bound planes, and apply for and receive a national interest exception to the pause upon arrival,” the DHS added.

At the same time, the US State Department said the US has revoked 60,000 travel visas after Trump ordered the travel ban.

A federal judge in Seattle, however, on Friday ordered a temporary halt to Trump’s travel ban, in the most severe blow to the controversial measure. – with reports from Agence France-Presse/Rappler.com