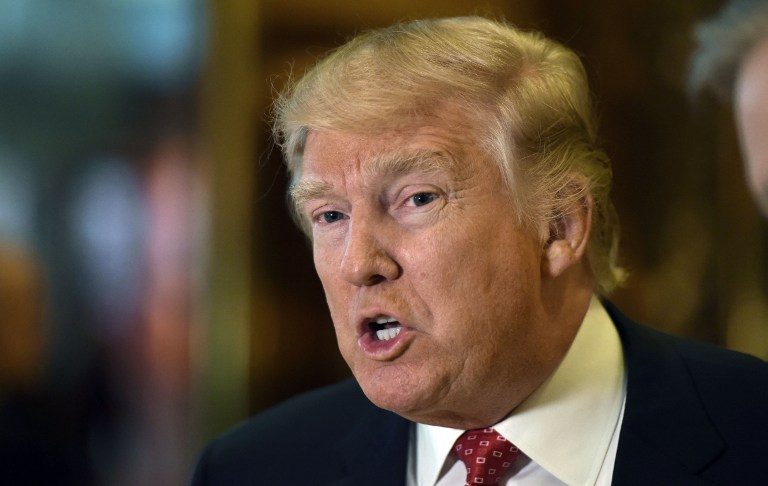 Facebook Twitter Copy URL
Copied
(UPDATED) 'I have nothing to do with Russia,' says US President Donald Trump. 'The whole Russia thing is a ruse.'

WASHINGTON DC, USA (UPDATED) – President Donald Trump insisted Thursday, February 16, that neither he nor his campaign team had contacts with Russian officials in the run-up to last year’s US election, contradicting an explosive report which he blasted as “fake news.”

Instead, Trump accused members of US intelligence agencies of breaking the law by leaking information about the calls.

The new president, in the midst of a turbulent week of back-and-forth accusations about contacts with Russia and his battle with the intelligence community, addressed the concerns during an extraordinary White House press conference.

Asked whether he or anyone on his staff had engaged in contacts with Russia prior to the election, Trump proclaimed: “No, nobody that I know of.”

“I have nothing to do with Russia,” Trump said. “The whole Russia thing is a ruse.” (READ: Trump dodges questions as Russia scandal deepens)

It was a full-throated denunciation of a bombshell report by the New York Times which said intercepted calls and phone records show Trump aides were in repeated contact with Russian intelligence officials well before the US elections.

Trump stressed that the Times story centered instead on inappropriate action by US intelligence agencies, as he stepped up earlier Thursday attacks in which he vowed to catch “low-life leakers” of potentially classified information that led to the ouster of his national security advisor.

“Those are criminal leaks” by people angry about Democrat Hillary Clinton’s loss, he told reporters, as he revealed he has asked the Justice Department to investigate the disclosures.

“The people that gave out the information to the press should be ashamed of themselves.”

The Washington Post meanwhile reported that current and former US officials said Flynn denied to FBI agents that he had discussed US sanctions on Russia with Moscow’s ambassador.

Should it turn out that he discussed the sanctions, as Trump appears to believe he did, Flynn could be in legal jeopardy because lying to the FBI is a felony.

“What he did wasn’t wrong,” Trump stressed.

“I didn’t direct him” to discuss sanctions with Russia’s envoy, Trump added. “But I would have directed him because that’s his job” to talk with foreign contacts.

Late Thursday Flynn’s replacement was still undetermined after former navy admiral Robert Harward, who Trump had reportedly tapped for the job, declined it, US media said.

In his wide-ranging presser Trump defended his political agenda, and said that next week he will introduce an amended version of the much-criticized travel ban now caught up in court.

He also pledged that new trade deals were coming that would stop countries from “taking advantage of us,” and said he would “show great heart” in dealing with undocumented immigrants who arrived as children and are protected from deportation.

But the crux of his remarks centered on Russia connections.

“I would love to be able to get along with Russia,” he insisted. “It would be much easier for me to be tough on Russia, but then we’re not going to make a deal.”

The latest salvoes came amid reports that Trump plans to name New York billionaire Stephen Feinberg – who has no national security experience – to lead a sweeping review of US intelligence agencies, raising fears of a bid to curtail their independence.

Trump had pointed the finger at the National Security Agency, which conducts electronic surveillance, and the FBI, which handles counter-intelligence probes, as possible sources of the leaks.

The drumbeat of revelations has infuriated Democrats and alarmed Republican leaders, wary of Trump’s overtures toward Russia.

“It is a cloud over the White House,” said Republican Senator Lindsey Graham, who has called for in-depth investigations.

“I believe there was collusion,” House Democrat Maxine Waters told CNN, stressing that Trump’s focus on the leaks was a distraction.

Trump’s stance on leaks has flipped since last year’s campaign when he proclaimed “I love WikiLeaks” – the organization that published hacked Clinton campaign emails.

He also dismissed as a “joke” his suggestion that Russia was behind the damaging leaks.

By January, US intelligence had concluded that those leaks were part of a wider campaign ordered by President Vladimir Putin to try to tilt the election in Trump’s favor. Moscow denies any involvement.

Meanwhile, the Trump administration has moved gingerly on Russia, sending top officials to Europe to reassure NATO allies while making its opening official contacts with the Russians.

Secretary of State Rex Tillerson met with Russian counterpart Sergei Lavrov in Bonn, and said Washington is prepared to work with Russia “when we can find practical areas of cooperation.”

In Brussels, Defense Secretary James Mattis said the Pentagon was not ready “right now” for military cooperation with Moscow “but our political leaders will engage and try to find common ground.” – Rappler.com