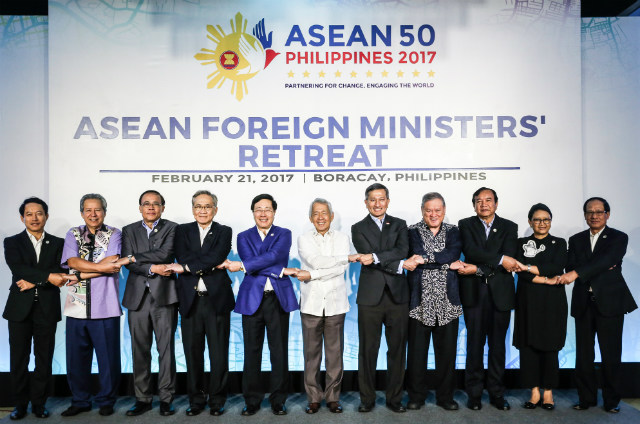 These ministers – a minority in the 10-member ASEAN – explicitly backed the Philippines’ legal victory against China on July 12, 2016, before an arbitral tribunal at the Permanent Court of Arbitration (PCA) in The Hague.

“There were two, 3, or 4 ministers who had expressed the same concern aboutrespect for the 2016 decision, on July 12, of the PCA arbitral tribunal,” Yasay said in a news conference after the ASEAN Foreign Ministers’ Meeting in Boracay on Tuesday. (READ: ASEAN ministers: ‘Grave concern’ over sea ‘militarization’)

Yasay was answering a question about whether foreign ministers wanted to refer to the ruling when crafting a framework code of conduct in the South China Sea.

Asked about the specific countries that sought respect for the ruling, Yasay said: “I would not be at liberty to mention the names of the countries concerned. I would leave it at that.”

After his briefing, Yasay declined to confirm if he was among the “2, 3, or 4” ministers who urged respect for the Hague ruling.

Yasay, however, clarified that the Philippines “did not say” that it “will not mention” the Hague ruling throughout its ASEAN chairmanship.

“We simply said that the merits of the arbitral tribunal’s decision, which is final and binding to all parties, need not be discussed in these meetings because you will never add or detract from what the ruling is already all about,” Yasay said.

On January 11, Yasay already said the Philippines is “not going to raise” the ruling during the ASEAN Summit this year, “because “there is really no useful benefit.”

He explained on the same day that the decision, after all, is “final and binding” for all parties. – Rappler.com