Feb 27, 2017 11:22 AM PHT
Agence France-Presse
Facebook Twitter Copy URL
Copied
Brazilians living through two years of steep recession and 12% unemployment have grasped this year's carnival as a chance to let off steam 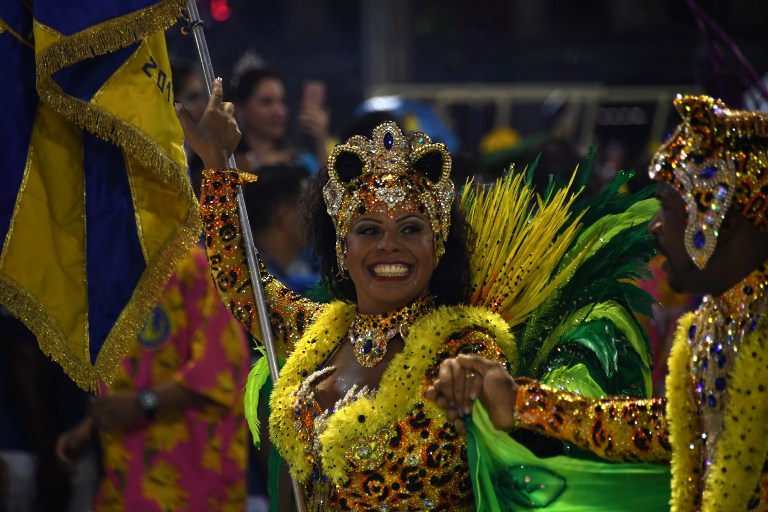 The accident, which coincided with heavy drizzle, marred the start of the all-night samba dance-off at the Sambodromo stadium.

The truck appeared to drive too close to a fence at the start of the competition piste, footage on Brazilian television showed, and several people were hit.

One woman, a photographer, had a leg badly crushed.

Despite the rain, however, the packed Sambodromo erupted in cheers as the annual contest opened in a deafening barrage of fireworks.

Brazilians living through two years of steep recession and 12% unemployment have grasped this year’s carnival as a chance to let off steam. In Rio especially, the thrill of hosting the Olympics 6 months ago has given way to the grim reality of rising crime and near bankruptcy of the state government.

So when the drummers of Paraiso do Tuiuti – the first of 6 samba schools competing through the night to Monday morning, February 27 – began beating rhythm, the crowd roared.

Samba queens dressed in sequined micro-costumes and vast feathered headdresses danced at dizzying speed. Behind them came an army of drummers and costumed dancers, interspersed by wildly over-the-top floats.

Each school picks a theme for its parade and is judged according to strict criteria. Another 6 schools were to parade on Monday night, with the champion being announced on Wednesday, March 1, the start of Lent in mostly Roman Catholic Brazil.

The most daring parade was from the samba school known as Imperatriz Leopoldinense, which chose the destruction of Brazil’s majestic Amazon rainforest as its theme.

But Imperatriz Leopoldinense waded into the debate over indigenous rights, agribusiness expansion into once pristine lands, and the future of the ever more under pressure Amazon.

Floats included portrayals of the jungle, indigenous musicians, piles of skulls and a giant head of a crying indigenous man, crushed by a log the size of a bus.

Members of real native tribes were joining the parade to raise awareness over their plight.

“This parade is incredibly important,” said Leticia Campos, 35, who was participating in a tight green costume with bright red wings, representing the forest on fire.

“People here never pay attention to the Indians when in fact they are the masters of the rainforest and it was stolen from them.”

The parade has infuriated members of the powerful agribusiness sector, which is frequently accused of being a major contributor to global warming through logging and cattle ranching.

The Brazilian Association of Cattle Breeders called the parade “unacceptable.” The rice industry lobby warned of “damage to the country.”

Rio is Brazil’s carnival capital. Tourism officials told Globo newspaper Sunday that as many as 1.5 million tourists have descended on the city, the best result in 8 years, injecting some 3 billion reais ($960 million) into the local economy. – Rappler.com