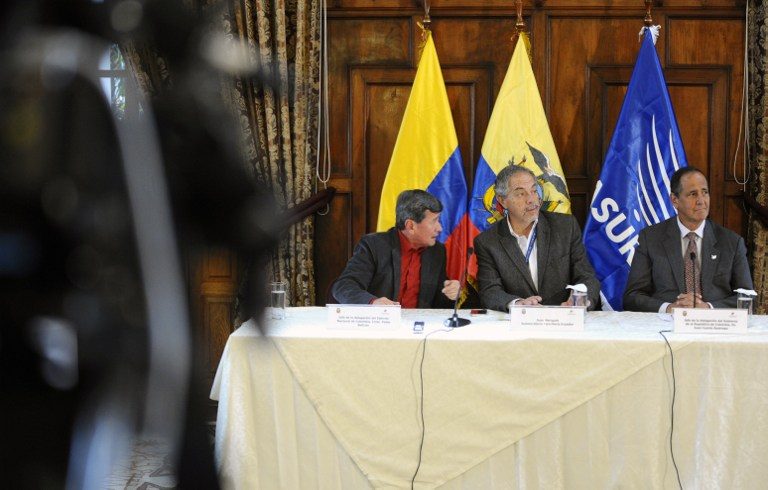 BOGOTA, Colombia – Clouds gathered Monday, February 27, over peace talks aimed at ending Colombia’s half-century conflict after the ELN rebels claimed responsibility for a deadly bombing at a bullring in Bogota.

The authorities had already said they suspected the National Liberation Army (ELN) of carrying out the February 19 attack, which killed a police officer and wounded more than 20 at the Plaza Santamaria bullring in the capital.

But the leftist rebels’ claim of responsibility, issued late Sunday, February 26, on Twitter, pollutes the air at the peace talks as President Juan Manuel Santos seeks a deal with Colombia’s last active rebel group to end a conflict that has killed 260,000 people.

The bombing came 12 days after the talks opened – a bloody reminder of the violence Colombia still faces even as the government implements a historic peace deal with the country’s largest rebel group, the Revolutionary Armed Forces of Colombia (FARC).

The ELN also claimed responsibility for a February 14 attack on a military patrol in eastern Colombia that wounded two soldiers, as well as several bombings on the Cano Limon Covenas oil pipeline.

The government said the ELN, which initially denied responsibility for the bullring bombing, was “very mistaken” if it thought it could pressure Santos into a ceasefire with attacks.

“The ceasefire will be reached when the ELN understands that it is reached by de-escalating, not escalating, the conflict,” the government’s chief negotiator at the talks, Juan Camilo Restrepo, wrote on Twitter.

The ELN sought to downplay the tension.

It said Monday morning that talks were resuming as scheduled in the Ecuadoran capital Quito, “with a good atmosphere between the two sides.”

The talks are now at a crossroads, said Frederic Masse, an expert on the conflict.

“If the government leaves the negotiating table, it’s the end of the (peace) process,” he said.

Santos is trying to achieve “complete peace” by reaching a deal with the ELN, Colombia’s last active rebel group.

He won the Nobel Peace Prize in October after reaching an accord with the FARC.

This weekend, the FARC’s 6,900 fighters finished converging at 26 demobilization zones where they will disarm under UN supervision.

Both the FARC and the ELN took up arms in 1964 at the start of a conflict that drew in multiple leftist guerrilla groups, right-wing paramilitary units, drug cartels and the army.

The FARC opened talks with the Santos government in 2012. But the two sides declared a bilateral ceasefire only in June 2016, when their peace deal was nearly complete.

The government has rejected declaring a ceasefire with the ELN so early in the process, saying it would only strengthen the rebels’ hand.

The ELN said the Santos administration was ultimately to blame for the bombing because it insisted on negotiating in mid-conflict.

“It is not coherent on the government’s part to sit down to peace talks while delaying a bilateral ceasefire and subjecting the population to the suffering of war,” it said.

The ELN has an estimated 1,500 fighters.

Experts warn it could be a tougher negotiating partner than the FARC because it has more hardline demands for sweeping social change, plus a decentralized command structure that could make it harder to convince the rank and file to accept an eventual deal. – Rappler.com