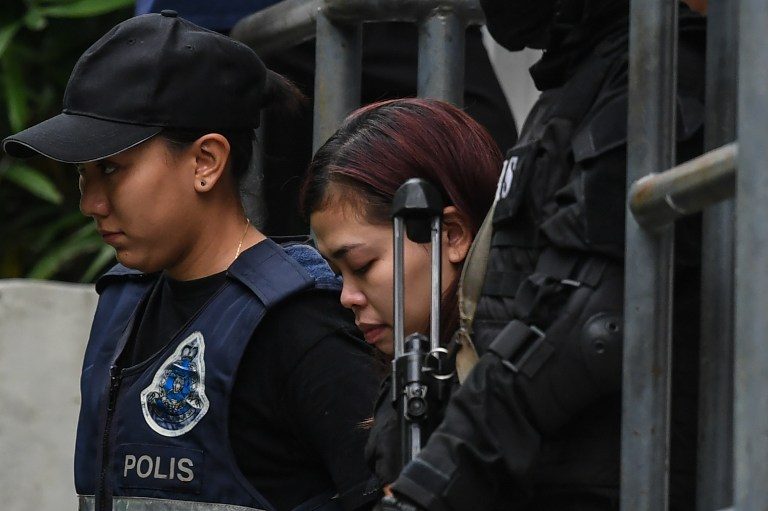 Facebook Twitter Copy URL
Copied
The suspects, who claim they thought they were merely taking part in a prank video, remained composed throughout the brief hearing

SEPANG, Malaysia – Two women were charged Wednesday, March 1, with the murder of Kim Jong-Nam, the half-brother of North Korea’s leader, after his assassination at a Malaysian airport last month.

Indonesian Siti Aisyah, 25, and Doan Thi Huong, 28, from Vietnam, were surrounded by a heavy police presence as they were charged in court over the February 13 killing involving a deadly nerve agent.

Siti, wearing a red T-shirt, was brought in first to hear the murder charge read out before being taken away. Huong, also dressed casually, then heard the charge in Vietnamese.

The handcuffed women were both told they faced the death penalty if found guilty.

Neither woman was asked to enter a plea and their trial is not expected to begin for several months.

However, after hearing the charge, Huong’s lawyer S. Selvam said she told the court in Vietnamese: “I am not guilty.”

Selvam added his client was “nervous as she is facing a murder charge”.

The suspects, who claim they thought they were merely taking part in a prank video, remained composed throughout the brief hearing.

They appeared to be wearing bulletproof vests as they were escorted from the building, with Huong looking tired as she was lead away.

Indonesia’s acting ambassador to Malaysia Andreano Erwin said Wednesday he had met Siti in court and said she was “calm”.

“We told her to take care of her health as it will be a long trial process,” he said.

Police accuse the pair of having wiped the VX nerve agent into Kim’s face at Kuala Lumpur airport. The deadly poison is classed as a weapon of mass destruction and banned around the world.

Kim was dead within 20 minutes of being attacked and would have suffered a “very painful death” as his organs shut down, Malaysia’s health minister has said.

The suspects were brought to the isolated courthouse on the outskirts of the capital under heavy security, and bundled into the building through a media scrum.

More than 100 heavily armed police wearing balaclavas and wielding automatic weapons had secured the entrance to the court.

Seoul says its isolated neighbor was behind the assassination, and claims the North’s agents engaged two outsiders to carry out the murder.

North Korea has not acknowledged the identity of the dead man but has insisted Malaysia hand over the corpse, and says it does not accept the findings of an autopsy. – Rappler.com