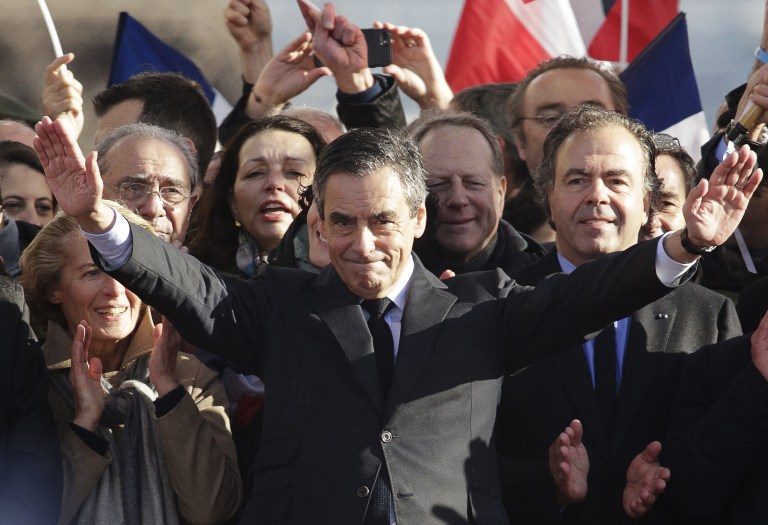 Facebook Twitter Copy URL
Copied
(UPDATED) Fillon had been expected to go before investigating magistrates on Wednesday over the scandal, which has undermined his campaign for the presidency

Fillon, a conservative who was once frontrunner for this year’s vote, has been battered by a stream of media revelations since late January, focused on parliamentary jobs given to his wife and his links to a billionaire businessman.

Welsh-born Penelope was paid hundreds of thousands of euros (dollars) from public funds between 1986 and 2013, but she is accused of doing negligible work for the salary.

From May 2012 to December 2013, while employed by Fillon’s parliamentary office, she was also on the payroll of a magazine owned by tycoon Marc Ladreit de Lacharriere, who also gave Fillon an undeclared loan.

Investigating magistrates charged Fillon on Tuesday, a day earlier than expected, with misuse of public money, misuse of corporate assets, and failing to declare his assets to a public watchdog, legal sources told Agence France-Presse.

“The hearing was brought forward so that it could take place in a calm manner,” lawyer Antonin Levy told Agence France-Presse.

He has defied calls to step aside from rebels in his Republicans party and has weathered a flurry of resignations from his campaign team, insisting throughout that he will be cleared.

The disarray has benefited centrist independent Emmanuel Macron in particular, as well as far-right leader Marine Le Pen, who are shown in opinion polls to be the likely top two candidates in the first round of voting on April 23.

Polls suggest 39-year-old Macron would beat Le Pen in the decisive second round on May 7 – but after Donald Trump’s victory in the United States and Britain’s vote to leave the European Union, analysts caution against bold predictions.

Two aides, including her personal assistant, have been charged, but the scandal has had little apparent effect on her poll numbers.

Following reports in the Canard Enchaine newspaper at the end of January, Fillon admitted to employing Penelope and two of their children as parliamentary assistants.

The explosive so-called Penelope-gate has dominated the campaign since, leading to infighting in the Republicans and turning an election that looked difficult to lose into an ordeal for the party.

After initially saying he would withdraw from the presidential race if charged, Fillon has vowed to continue, calling the investigation an attempted “political assassination”.

Again on Tuesday he repeated his assertion that the investigation was designed to discredit him, saying that the judicial calendar seemed to be “coordinated with the political campaign.”

Earlier, the mountain-lover and motor racing enthusiast appeared relaxed when he spoke to the national hunting federation Tuesday.

After complaining frequently of being the target of a witch hunt, he said he was pleased to “be among real hunters”, adding that the “bullets are flying low” in the election campaign.

Fillon, prime minister from 2007-12, was the surprise winner of the Republicans’ primary in November after campaigning as a clean and honest candidate who would transform France with a “radical” economic program.

Rebels in his party have now accepted that attempts to dislodge him have failed ahead of a deadline for presidential candidates this Friday, but a constant drip of revelations continues to undermine his campaign.

Le Parisien newspaper reported new details on Tuesday about how two of his five children, Charles and Marie, turned over part of their parliamentary salaries to their parents.

Her lawyer said the money was to reimburse her parents for her wedding.

At the weekend, the Journal du Dimanche said Fillon had been gifted clothing worth nearly 48,500 euros ($51,800) furnished by jet-set tailor Arnys since 2012.

The devout Catholic is far from alone in having legal problems in French politics, but it is the first time a candidate of a major party will seek the keys to the Elysee Palace with such problems.

Ex-president Jacques Chirac was found guilty in 2011 after leaving office over a “fake jobs” scandal while he was mayor of Paris in the 1990s.

Former president Nicolas Sarkozy, leader while Fillon was prime minister, is under investigation on charges of illegal campaign financing among others. – Rappler.com