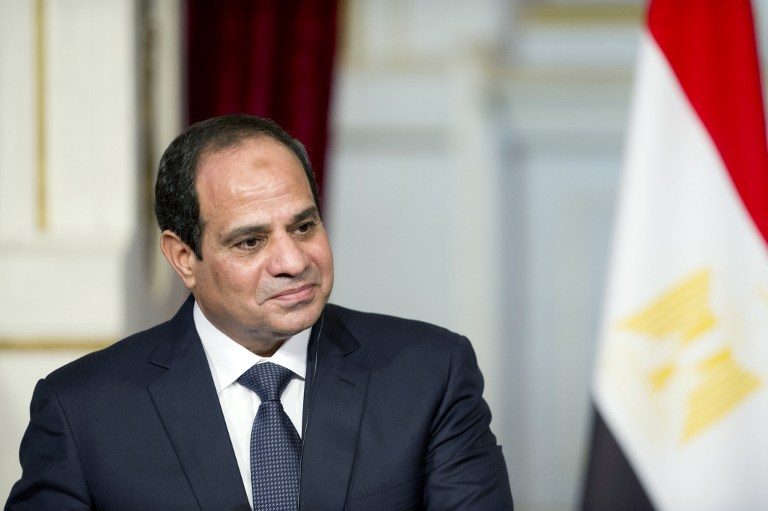 CAIRO, Egypt – Egyptian President Abdel Fattah al-Sisi will visit Washington in April for talks with US President Donald Trump that will include the stalled Palestinian-Israeli peace process, his office said Monday, March 20.

A statement by the presidency said “the Palestinian issue will be discussed” with Trump during Sisi’s “visit to Washington early in April.”

Sisi “stressed the importance” of the US administration’s “pivotal role in pushing forward the peace process” to try to find a solution to the decades-old Palestinian-Israeli conflict leading to the establishment of a Palestinian state.

Trump has cast uncertainty over years of international efforts to foster a two-state solution to the conflict when he met Israeli Prime Minister Benjamin Netanyahu at the White House in February.

At that meeting, Trump broke with decades of US policy by saying he was not bound to a two-state solution to the conflict and would be open to one state if it meant peace.

The peace process has been deadlocked since April 2014.

Monday’s announcement came as Sisi held talks in Cairo with Palestinian president Mahmud Abbas, who is also due to travel to Washington in early April for talks with Trump, according to a Palestinian official who requested anonymity.

Sisi’s visit to Washington would be the first to the White House since the former army chief was elected president in 2014.

His relations with former president Barack Obama’s administration had been strained since the ouster of then-president Mohamed Morsi led by Sisi, who was defence minister at the time.

The US had briefly suspended its military aid to Egypt following Morsi’s ouster. Washington’s annual $1.3 billion in military aid was fully reinstated in 2015.

In January Trump pledged in a phone conversation with Sisi that the United States remained committed to bilateral ties with Egypt.

“The president committed to continuing military assistance to Egypt and working with Egypt to ensure that assistance most effectively supports the Egyptian military’s fight against terrorism,” White House spokesman Sean Spicer said at the time. – Rappler.com