‘Beauty and the Beast’ to be shown uncut in Malaysia 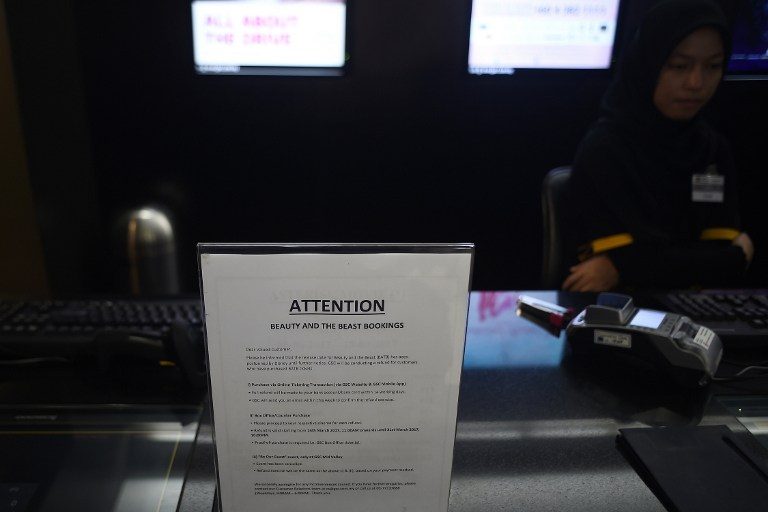 Facebook Twitter Copy URL
Copied
The film 'will be released in Malaysia on the 30th March, rated PG13 with no cuts,' a spokeswoman for Disney in Southeast Asia says

KUALA LUMPUR, Malaysia – Disney’s hit movie Beauty and the Beast, under fire from Malaysian conservatives for a “gay moment”, will be released in the Muslim-majority country without any cuts, the entertainment giant said Tuesday, March 21.

The film “will be released in Malaysia on the 30th March, rated PG13 with no cuts”, a spokeswoman for Disney in Southeast Asia told Agence France-Presse by email.

A movie chain, Golden Screen Cinemas, also tweeted that the movie would be shown uncut on that date in Malaysia.

A “PG 13” rating means parental guidance is advisable for children aged below 13.

Malaysian film censors could not immediately be reached for comment.

Malaysian authorities had demanded cuts but Disney refused to budge, choosing to instead to appeal the decision last week.

“The way he dances is… gay and the dialogue and the lyrics of the song are too. In the same scene he also lifts up his shirt and shows a love bite on his tummy,” Abdul Halim Abdul Hamid, head of Malaysia’s Film Censorship Board, told Agence France-Presse last week.

But some members of parliament on Monday, March 20, questioned the need to censor the film, arguing that the debacle was giving Malaysia bad publicity.

Homosexuality is illegal in Malaysia and sodomy can result in imprisonment, corporal punishment and fines.

Religious groups and Islamic scholars had previously called for the film to be banned over concerns that it would promote “negative values” in the country.

The film has also come under fire from religious figures in neighboring Singapore, while Russia slapped an adults-only rating on it last week following pressure from an ultra-conservative lawmaker.

Singapore has allowed the movie to be shown uncut but with a parental guidance rating for “mild portrayals of violence”.

Despite the controversy, the movie shattered box office records in its opening weekend, taking a monster $175.7 million in North America and $357 million in total, according to industry data. – Rappler.com