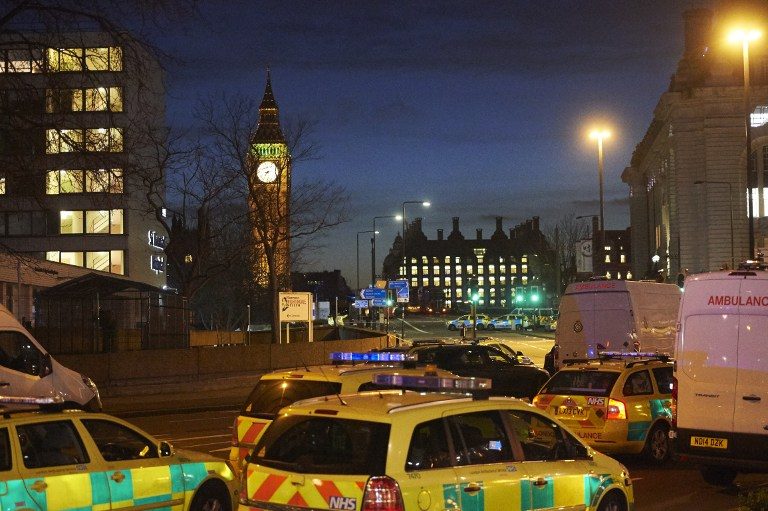 MANILA, Philippines – The Philippine embassy in London is advising Filipinos in London to “remain vigilant” after the deadly terror attack outside the UK Parliament on Wednesday, March 22.

Four people were killed and 40 injured after being run over and stabbed in a lightning attack at the gates of the Houses of Parliament in Westminster.

There has been no report of Filipinos affected by the incident, the embassy said.

“We advise Filipinos in the UK to remain vigilant and monitor local security advisories,” the embassy said in a statement.

For Filipinos needing assistance, the embassy is advising them to call the Philippine mission’s emergency hotline, +44 7802 790695.

“Our thoughts and prayers are with the victims and their loved ones whose lives have been affected by the Westminster attack,” the embassy said in a statement.

The attack unfolded across Westminster Bridge in the shadow of Big Ben, a towering landmark that draws tourists by the millions and stands over Britain’s Houses of Parliament – the very image of London.

The attacker’s car struck pedestrians on the bridge before crashing into the railings surrounding the heavily-guarded Houses of Parliament, sowing first shock then panic in the seat of British power.

The assailant then ran through the gates brandishing a knife and stabbed a 48-year-old policeman to death before being shot dead by another officer.

Prime Minister Theresa May described the attack as “sick and depraved” and said that “the terrorist chose to strike at the heart of our capital city” in an attack on Britain’s democratic values. – with a report from Agence France-Presse / Rappler.com