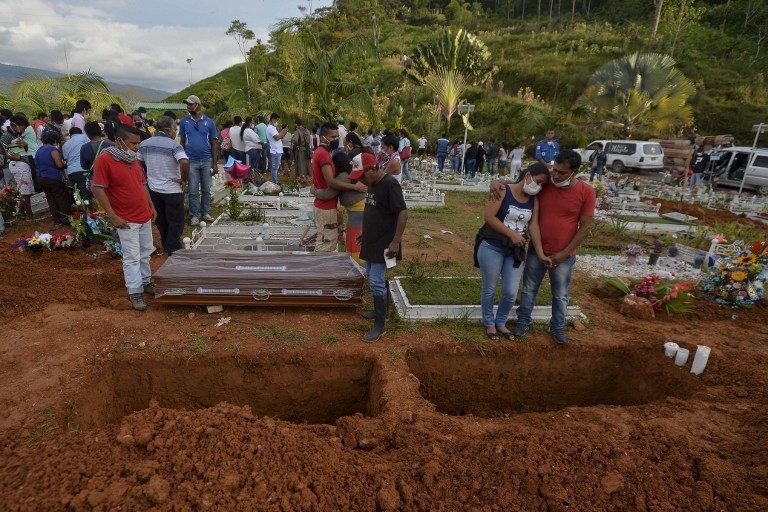 Facebook Twitter Copy URL
Copied
In the town cemetery, men are busy digging graves in the red soil for dozens of the 273 people so far counted as dead

MOCOA, Colombia – Parents wailed over the coffins of their children while others searched Tuesday, April 4, for the missing or tended relatives wounded when a mudslide swept them from their beds in southern Colombia.

Broad brown swathes of debris scar the town of Mocoa where the mud surged through on Friday night, March 31, sweeping homes away and drowning whole families together.

In the town cemetery, men were busy digging graves in the red soil for dozens of the 273 people so far counted as dead.

Mercy Perenguez had ordered 3 graves to be dug, for her daughters aged 6, 11 and 13.

She was waiting for authorities to release the bodies.

“They are all dark, nearly black, and swollen” from the effects of the flood, Perenguez, 33, told Agence France-Presse.

Her children were among at least 43 minors killed in the disaster, according to a toll given on Monday, April 3, by President Juan Manuel Santos.

At the cemetery, Flor Enil Lozada cried over the brown wooden coffin of her son Jhon, 22.

“Why him? Why did you take him?” she wailed, as her 6 surviving children stroked her hair and back.

Jhon was swept away along with his wife and 18-month-old daughter when the mud came.

“They loved each other so much. He adored the little girl,” Lozada said.

The family wept as they showed photographs on their mobile telephones: the baby girl’s first birthday; the girl dancing as a toddler; the young couple kissing.

“They were 3 in one and that is how they have ended up,” Lozada said.

Lozada’s mourning in the graveyard was not done. She was waiting for two more coffins to be brought: those of her daughter-in-law and granddaughter.

Ramiro Mora wandered the streets with a mask over his nose and mouth to keep out the dust that rose as the mud dried.

Over the mask, only his tear-reddened eyes could be seen.

He was looking for his 18-year-old daughter, Rudy.

“She has a scar here on her right arm. She is pale, blonde,” he said.

Rudy was swept away in the deluge as her father tried to cling to her and his two other children.

“We were holding onto each other’s hands when I heard her say: ‘Help me, help me,” he said.

“But I couldn’t, because we were all covered” by the mud.

Monday night saw the passing of the crucial 3-day point, after which rescuers warn it is rare to find survivors from a disaster like this.

The Red Cross said it had a list of 311 missing people being sought by their families.

The governor of the surrounding Putumayo department, Sorrel Aroca, said Mocoa had a population of 70,000 of which some 45,000 were affected by the disaster.

The government and aid groups were giving out food and vaccinations to those whose homes were destroyed.

Officials said 80% of the town was without electricity.

Santos declared a state of emergency and named his Defense Minister Luis Carlos Villegas to head the reconstruction effort.

Villegas told reporters it could take up to 3 years to rebuild the town.

Many locals have said homes should never have been built so close to the banks of the 3 rivers that flooded Mocoa.

“It was an area at risk. The river reclaimed its space,” said one mourner by a graveside in the cemetery

Flowers and balloons for a child decked one of the graves. Nearby a man played a tune on a guitar to try to raise morale.

At his side, another drowned out the music with his cries.

“If my God loved us, he would not kill us like this.” – Rappler.com