U.S. warns of ‘own action’ after Syria chemical massacre 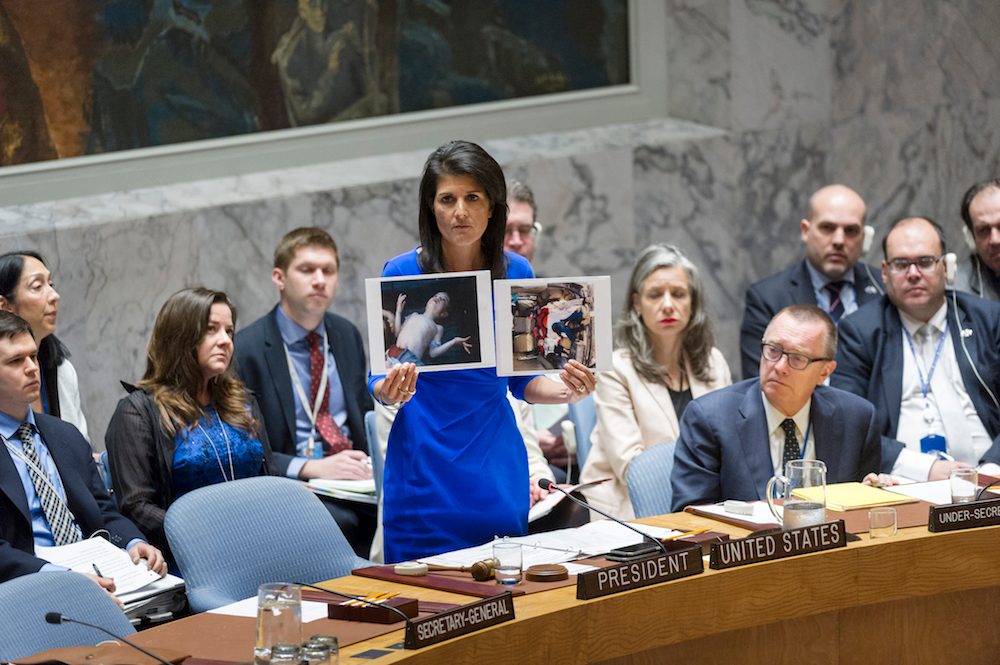 Facebook Twitter Copy URL
Copied
Ambassador Nikki Haley: 'When the United Nations consistently fails in its duty to act collectively, there are times in the life of states that we are compelled to take our own action'

WASHINGTON DC, USA / KHAN SHEIKHUN, Syria (UPDATED) – The United States and Russia were on a collision course over Syria on Wednesday, April 5, after a horrific chemical attack so shocked President Donald Trump that Washington threatened unilateral US action.

At least 86 people were killed early on Tuesday, April 4, in rebel-held Khan Sheikhun in northern Syria and dozens more were being treated after they were found convulsing and foaming at the mouth.

And he came to office promising both to improve ties with Assad’s ally President Vladimir Putin of Russia and to focus US efforts in Syria solely on the defeat of the Islamic State (ISIS) group.

But on Wednesday – as footage emerged of Syrian children choking to death in agony – he declared that his view of the conflict had been changed by an attack that “cannot be tolerated.”

“It crossed a lot of lines for me,” Trump told reporters at a joint White House news conference with Jordan’s King Abdullah, alluding to Obama’s failure to enforce his own 2013 “red line.”

“I will tell you, it’s already happened, that my attitude towards Syria and Assad has changed very much… You’re now talking about a whole different level.”

Trump did not go into detail about what any US response to the atrocity would be – and he has previously opposed deeper US military involvement in Syria’s civil war.

The US ambassador to the United Nations, Nikki Haley, warned of unilateral action and Secretary of State Rex Tillerson urged Russia to rethink its support for Assad.

“There is no doubt in our mind that the Syrian regime under the leadership of Bashar al-Assad is responsible for this horrific attack,” Tillerson told reporters.

“And we think it is time for the Russians to really think carefully about their continuing support for the Assad regime.”

Tillerson is due in Moscow next week for talks that will now be clouded by the Khan Sheikhun controversy.

At the United Nations, Haley was equally forthright.

“When the United Nations consistently fails in its duty to act collectively, there are times in the life of states that we are compelled to take our own action,” she said.

The warning came during an emergency meeting of the UN Security Council called by France and Britain after the attack.

Haley, lashing out at Russia for failing to rein in its ally Syria, showed photographs of lifeless children choked in the attack.

“How many more children have to die before Russia cares?” she demanded. “If Russia has the influence in Syria that it claims to have, we need to see them use it.”

Britain, France and the United States have presented a draft resolution demanding a full investigation of the attack.

Russia – along with Iran – is Syria’s main diplomatic and military partner. And Moscow, true to form, said the draft text was “categorically unacceptable.”

Failure to agree on a compromise text could prompt Russia to use its veto to block the draft resolution. Moscow has used its veto seven times to shield Syria from UN action.

The Western-backed draft text backs a probe by the Organization for the Prohibition of Chemical Weapons (OPCW) and demands Syria provide information on its operations.

Russia’s deputy ambassador Vladimir Safronkov told the UN council that the proposed resolution was hastily prepared and unnecessary, but voiced support for an inquiry.

“The main task now is to have an objective inquiry into what happened,” he said.

Russia turned up at negotiations with a rival draft resolution that made no reference to specific demands that Damascus cooperate with an inquiry, diplomats said.

Negotiations were continuing on the draft text and diplomats said there would not be a vote before Thursday at the earliest.

The British ambassador, Matthew Rycroft, told reporters he hoped council members would agree on a draft resolution by Thursday, but vowed to press for a vote regardless.

Moscow, which launched a military intervention in 2015 in support of Assad’s forces, defended the government against accusations of responsibility for the attack.

It claimed the deaths were caused when a Syrian strike hit a “terrorist warehouse” for bombs containing “toxic substances” and pledged to maintain its military support for Assad.

Western experts have dismissed this claim as implausible, given the scale and nature of the casualties.

And a senior State Department official said: “Anyone with common sense and the ability to look at pictures knows that what the Russians are saying about the depot is not true.”

‘A gas so lethal’

Doctors said victims showed symptoms consistent with the use of a nerve agent such as sarin – suspected to have been used by government forces in deadly attacks outside Damascus in 2013.

US officials have not said what kind of agent they think was used, but Trump said it was “a chemical gas that is so lethal, people were shocked to hear what gas it was.”

If confirmed, the attack would be among the worst incidents of chemical weapons use in Syria’s civil war, which has killed over 320,000 people since it began in March 2011.

But there have been repeated allegations of chemical weapons use since. – Rappler.com