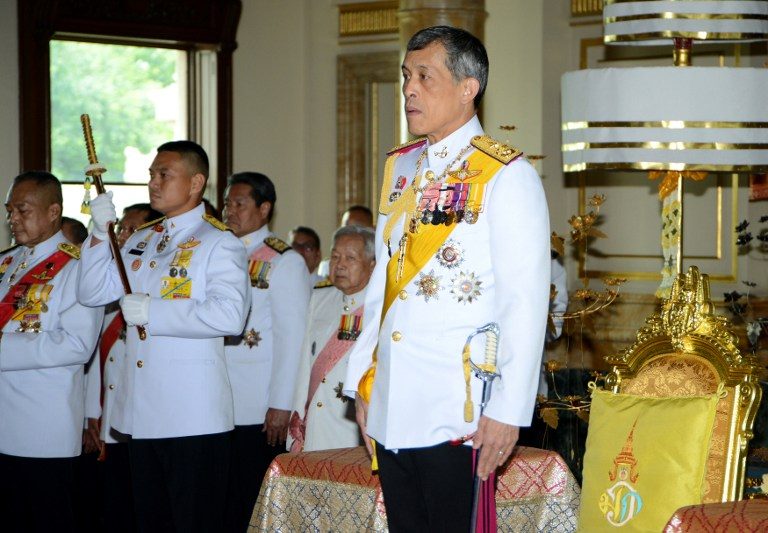 BANGKOK, Thailand (UPDATED) – Thailand’s king signed a new military-backed constitution on Thursday, April 6, that strengthens the army’s hand in government and puts the country on the path to polls after 3 years of junta rule.

The military says the charter – Thailand’s twentieth since 1932 – will curb unrest in the politically-split kingdom and keep out corrupt lawmakers.

But opponents say the new document means any polls, whose date keeps slipping, will only offer Thais a form of neutered democracy with a fully appointed senate and tough controls on elected politicians.

King Maha Vajiralongkorn, who ascended the throne following the October death of his widely revered father Bhumibol Adulyadej, signed the document in a televised ceremony in Bangkok on Thursday afternoon.

In a pomp filled ceremony, the king then bestowed the signed charter to Thailand’s junta chief inside a ornate throne hall filled with white-clad political grandees and foreign dignitaries.

Vajiralongkorn surprised many earlier this year by ordering rewrites to parts of the charter that deal with his powers.

But in a sign of the opacity surrounding all things royal in Thailand, authorities have yet to release the wording of those new sections.

Thailand has stumbled through more than a decade of political instability that has hampered growth in what was once one of the region’s fastest growing economies.

In a period dubbed “the lost decade” Thais witnessed repeated rounds of deadly protests, a string of short-lived governments and two military coups.

Back to the future?

The charter received popular approval in a referendum last August, although the junta banned political campaigning against it and the public was not aware of the new king’s desire to tweak it.

Analysts say the latest constitution harks back to the Cold War-era when Thailand’s elected lawmakers were often kept in check by unelected bodies and committees in what many called “guided democracy”.

Thitinan Pongsudhirak, a politics expert at Chulalongkorn University, said the document is a far cry from Thailand’s most liberal charter, the 1997 so-called “People’s Constitution”.

“The new charter reverses progress on people’s representation that culminated with the 1997 constitution,” he told AFP.

“Now appointments are back en masse at the expense of elected representatives.”

Shinawatra-linked parties have won every election since 2001. Their opponents accuse them of corruption and damaging populist policies.

In addition to an appointed upper house, the new constitution bolsters the powers of the country’s interventionist constitutional court and makes it easier to impeach a civilian leader.

With royal approval secured, the junta’s drafting committee will now draw up a raft of organic laws that critics fear could further hem-in political parties, who have been barred from organising since the coup.

The military says the charter will help purge Thailand of corrupt civilian politicians and raise the possibility of elections being held by mid-2018 once it is signed.

They have also said they will draw up a “20-year plan” for the country that any future government will be bound to follow.

This week ousted PM Yingluck Shinawtra, who is entangled in a negligence trial since the coup that could see her jailed, said she hoped the charter would speed the kingdom’s return to democracy.  – Rappler.com