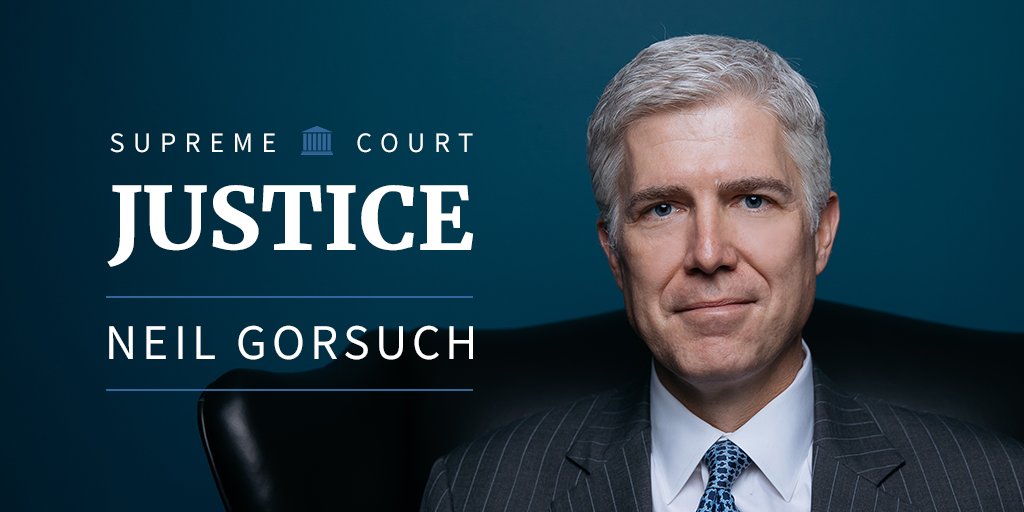 WASHINGTON, DC, USA (UPDATED) – The US Senate confirmed Neil Gorsuch to the Supreme Court Friday, April 7, culminating a 13-month fight over the vacancy and rewarding President Donald Trump by bringing a conservative tilt back to the bench.

The federal judge from Colorado crossed the finish line in a 54-45 vote, one day after Trump’s Republicans controversially changed Senate rules to circumvent a Democratic blockade of his nomination.

Congratulations to the newest Associate Justice of the Supreme Court! #SCOTUS pic.twitter.com/gC9ohD9QO6

“Today is a new day,” Senate Majority Leader Mitch McConnell said ahead of the vote, seeking to put a positive stamp on what has been a contentious congressional process for the new Republican administration.

Gorsuch is “going to make an incredible addition to the court,” McConnell said. “He’s going to make the American people proud.”

The White House said Gorsuch – the youngest nominee in a generation – will be sworn in by Chief Justice John Roberts on Monday, April 10, at 9:00 am (1300 GMT) in a private ceremony.

A public White House ceremony follows at 11:00 am.

Trump, in his superlative style, praised Gorsuch’s confirmation process as “the most transparent and accessible in history.”

“As a deep believer in the rule of law, Judge Gorsuch will serve the American people with distinction as he continues to faithfully and vigorously defend our Constitution,” he said in a statement.

The 49-year-old judge has been hailed by Republicans as a worthy successor to towering conservative justice Antonia Scalia, who died in February 2016 as the presidential race was gaining steam.

The 9-justice court has had one seat vacant for more than a year amid the ensuing political battle, with Democrats and Republicans trading bitter accusations of blame.

Gorsuch’s ability to write incisive rulings and his defense of a strict reading of the Constitution have fueled comparisons with Scalia.

But Gorsuch was staunchly opposed by opposition Democrats, angry that Republicans refused to grant a hearing to then-president Barack Obama’s pick to replace Scalia, Merrick Garland.

McConnell argued that since it was an election year, the next president should pick the nominee.

The Supreme Court is the final arbiter of many of the most sensitive issues of American life and law. Its members are appointed for life, so their influence is long-lasting.

The fight came to a head Thursday, April 6, as Democrats mounted a so-called filibuster that prevented Gorsuch’s nomination from advancing to a final vote.

Senate Republican leaders countered with the so-called “nuclear option,” a maneuver that changed the chamber’s rules so that moving Gorsuch – and all subsequent Supreme Court nominees – to a final vote requires a simple majority of 51 votes, rather than the traditional 60 votes.

The confirmation itself requires only a simple majority, which Gorsuch received with support from the chamber’s majority Republicans and a handful of Democrats.

“I think people were expecting a mushroom cloud as a result of the nuclear option, but it’s really just a restoration of the status quo before the filibuster yesterday.”

Gorsuch’s confirmation is destined to shape the bench just as Trump is seeking approval of a key plank of his political platform: his executive order that halts entry to the United States from citizens of several Muslim-majority nations.

The so-called travel ban has been halted in lower federal courts, but experts expect it will make its way to the Supreme Court.

Stephen Yale-Loehr, who teaches immigration law at Cornell Law School, said Trump has reason for optimism if his travel ban gets considered by the high court, possibly later this year.

“That may be particularly true” with Gorsuch on the bench, he added.

While Republicans have trumpeted Gorsuch’s sterling reputation, Democrats expressed worry that his record shows he is a jurist who favors big business.

Top Senate Democrat Chuck Schumer said he hopes Gorsuch has listened to “our concerns about the Supreme Court increasingly drifting toward becoming a more pro-corporate court that favors employers, corporations and special interests over working America.”

Gorsuch replaces another conservative, so his appointment does not dramatically alter the ideological makeup of the court. It is the next court appointment – whenever it comes – that would presage such a shift.

Professor Thomas Lee of Fordham University School of Law predicted that Gorsuch’s presence on the closely divided court will not automatically translate into more 5-4 wins for conservatives, at least not in particularly socially controversial cases.

“But some issues likely to be decided in the near future include questions of church-state relations regarding religion, exemptions for religious reasons, and state regulation of gun and abortion rights.” – Rappler.com