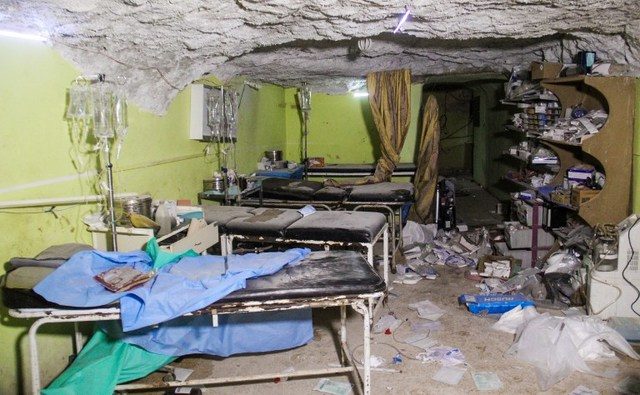 BEIRUT, Lebanon – A suspected chemical attack on a rebel-held town in Syria’s Idlib province on April 4 killed dozens of people.

Here is a recap of developments:

On April 4, 2017, an air strike on the rebel-held town of Khan Sheikhun kills at least 87 people, including children.

The Britain-based Syrian Observatory for Human Rights labels the raid the second deadliest use of chemical weapons in Syria’s 6-year conflict. A sarin gas attack in 2013 reportedly killed more than 1,400 people in a Damascus suburb. (READ: Who’s who in the Syria conflict)

Doctors in Idlib province note symptoms indicating a likely chemical attack, including dilated pupils, convulsions and foaming at the mouth.

A wave of international condemnation follows, with several governments accusing Assad of responsibility. The United States condemns the act as “reprehensible”.

British Foreign Secretary Boris Johnson says “all the evidence” points to Assad’s forces “using illegal weapons on their own people”.

US Secretary of State Rex Tillerson warns that Washington is “considering an appropriate response”.

Moscow says Washington does not have “realistic, verified information” to back up its allegations. President Vladimir Putin says that accusing Assad without proof is “unacceptable”.

Syrian Foreign Minister Walid Muallem insists the army “has not, did not and will not use this kind of weapons” even against “the terrorists that attack our civilians”. Overnight on April 6 to 7, the US military fires 59 Tomahawk missiles from warships in the eastern Mediterranean at the Shayrat airbase near the central city of Homs, which it says was the launchpad for the alleged chemical attack.

Trump calls on all “civilized nations” to seek an end to the conflict in Syria.

The Syrian government describes the US strike as “foolish and irresponsible”. Moscow calls the strikes “aggression against a sovereign state in violation of international norms”.

US Ambassador to the United Nations Nikki Haley says Washington is ready to take further action.

On April 9, allies of Damascus threaten reprisals against any party that carries out “aggression” against Syria. Haley says Syria will not experience peace with Assad in power.

On April 10, a US military spokesman says the Pentagon believes the Syrian regime probably has additional chemical weapons stocked at the targeted airfield. Pentagon chief Jim Mattis says the US strike destroyed a fifth of the Assad regime’s remaining warplanes.

The following day, Mattis says Washington has “no doubt” that Assad’s regime was behind the chemical attack.

A defiant Assad, in an exclusive interview with Agence France-Presse, calls the suspected chemical attack a “fabrication” to justify a US military strike against Syria.

He says his army had given up all its chemical weapons and that Syrian military power was not affected by the missile barrage.

In the interview, Assad also insists it was “not clear” whether an attack on Khan Sheikhun had even happened.

“You have a lot of fake videos now,” he says.

“We don’t know whether those dead children were killed in Khan Sheikhun. Were they dead at all?”– Rappler.com