2 alleged jihadists admit being at Brussels airport during attack – official 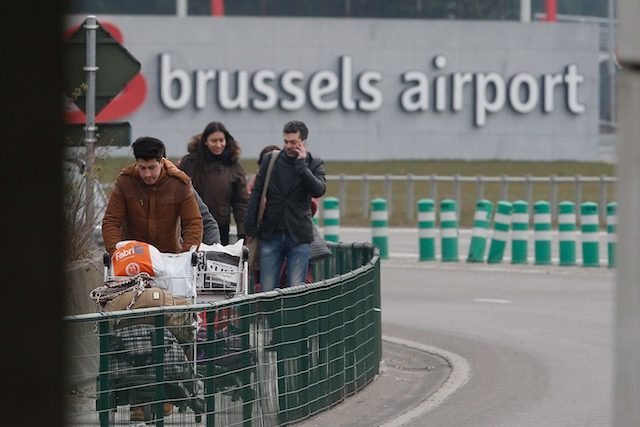 Facebook Twitter Copy URL
Copied
The men, who are charged with belonging to a terrorist organization, admit that while in Brussels they visited the cousin of the two brothers who blew themselves up in the coordinated attack

MADRID, Spain – Two suspected jihadists arrested in Spain have admitted being in Brussels airport at the time of the deadly March 2016 attack but deny involvement, a court spokesman said Thursday, April 27.

Mohamed Lamsalak and Youssef Ben Hammou were arrested earlier in the week as part of a joint investigation between Spanish and Belgian police. Officers seized firearms, drugs and cash in raids connected to the operation.

The two men “have admitted that they were at the airport when the bombs went off. They deny involvement in the attacks,” said a spokesman for the National Court, which specializes in terrorism cases.

Belgium has been on high alert since March 22 last year when suicide bombers attacked Zaventem airport and the Maalbeek metro station, killing 32 people and leaving more than 320 wounded.

The attacks were led by an Islamic State cell that was also responsible for the carnage in Paris in November 2015.

The spokesman said an inquiry had established that the men were in Brussels from March 16-23.

“They say that they went to Brussels to buy a car,” he said. “Investigators are working to determine if the money (intended for the purchase) was used to finance the attack or for any other motive”.

The men, who are charged with belonging to a terrorist organization, admitted that while in Brussels they visited the cousin of the two brothers who blew themselves up in the coordinated attack.

Investigators were looking into a document found on Hammou, a Google Maps print-out which showed the route from Germany to Brussels taken by Salah Abdeslam, the only survivor of the jihadist group behind attacks in Paris which left 130 dead.

Hammou and Lamsalak both deny any connection to the Paris attacks.

The two suspects were among a group of 9 people taken in for questioning in Barcelona and the northeastern region of Catalonia.

On Tuesday, April 25, police said the 9 were made up of 8 Moroccans and one Spanish national.

Four of those have been released on probation while 3 others remain in custody, but on charges not relating to terrorism.

Between 2012 and October 2016, Spain detained 186 people with suspected links to Islamic jihadism, including 63 in Catalonia, according to the interior ministry.

Spain, the world’s 3rd most visited country, increased its terror alert to category 4 on a 5-point scale in 2015 after attacks in France, Tunisia and Kuwait.

The country has been mentioned on extremist websites as a possible target for historical reasons, since much of its territory was under Muslim rule from 711 to 1492.

But it has been spared major jihadist violence since March 2004, when bombs exploded on commuter trains in Madrid, killing 191 people in an attack claimed by Qaeda-inspired militants.

Unlike France or Belgium, Spain is less exposed to the risk that radicalized citizens who left to fight abroad will return with plans to commit attacks on home soil.

Only around 160 Spaniards are estimated to have joined the Islamic State group in Iraq and Syria, according to a study by the Real Instituto Elcano think tank, compared with over a thousand from nearby France since 2012. – Rappler.com