Australia’s Turnbull to reset ties with Trump after icy start 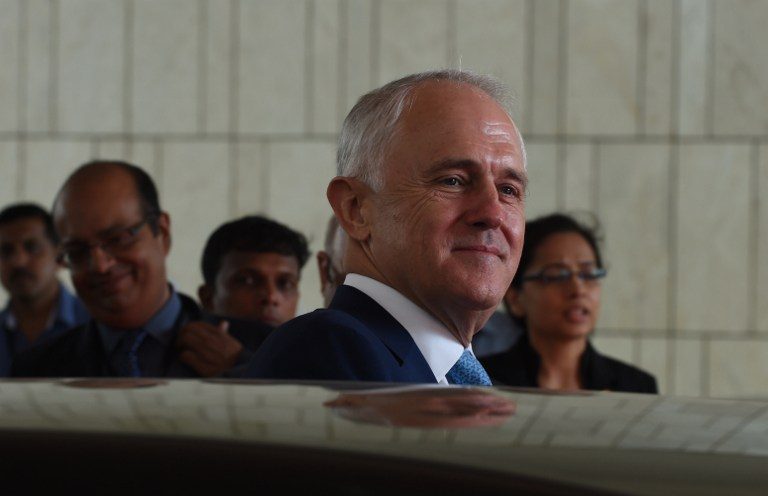 Facebook Twitter Copy URL
Copied
The advent of Trump invigorates a debate over Australia's place in the world and whether its future lies with an unpredictable United States, or a closer relationship with China, its top trading partner

SYDNEY, Australia – Malcolm Turnbull will seek to steady Australia’s longstanding alliance with the United States when he meets Donald Trump this week, after relations soured at a time of growing tensions in the Asia-Pacific.

His visit to New York on Thursday, May 4, comes as Washington works to shore up regional support against North Korea, ratcheting up pressure on China to do more to counter Kim Jong-Un’s nuclear ambitions.

But the advent of Trump has invigorated a debate over Australia’s place in the world and whether its future lies with an unpredictable United States, or a closer relationship with China, its top trading partner.

Turnbull, like Trump a businessman-turned-politician, has said he is “delighted” to meet with the US leader and affirm a relationship that has seen its militaries fight side by side for a century.

“We’ll talk about a wide range of security and economic issues, but top of the list obviously at the moment is North Korea,” the Australian prime minister said on Wednesday.

It will be their first encounter since a tetchy phone call rattled ties soon after Trump took office, when he took issue with a deal that the US would settle refugees from Australia’s Pacific island camps.

The president took to Twitter afterwards to label the agreement struck with Barack Obama’s administration as “dumb”.

On a trip to Australia last month aimed at mending fences, Vice President Mike Pence reaffirmed the US would take the refugees but added it “doesn’t mean we admire the agreement”.

The icy start was cooled further by Washington’s withdrawal from a trans-Pacific trade agreement that would have given Australian businesses greater access to the US and key regional markets.

“The single biggest thing is for the two leaders to establish some kind of rapport and get comfortable with one another,” said Simon Jackman, chief executive at the United States Studies Centre in Sydney.

The meeting will take place at the USS Intrepid museum in New York, where they will commemorate the 75th anniversary of the World War II Battle of the Coral Sea when US and Australian forces fought against the Japanese advance in the Pacific.

“All that imagery… will help paint a picture of a relationship that is getting increasingly normalized after a surprising and unexpected start,” Jackman told Agence France-Presse.

“The Australian public in particular might want a bit of reassurance that despite the fact Trump is a very unconventional president – a bit of a wild card – that nonetheless the United States remains a willing partner on a number of important dimensions.”

The history of military cooperation stretches back to World War I, and North Korea recently warned Canberra to think twice before “blindly and zealously toeing the US line” or face the threat of a nuclear strike.

Australia has backed Washington in calling on Beijing to bring the rogue state to heel, although several former senior Australian diplomats have also urged Canberra to rethink ties with the US in light of China’s rise.

Turnbull is expected to reaffirm Australia’s allegiance to the US on Thursday.

“The Trump administration is now coming out, indicating quite strongly that it isn’t going to be the isolationist presidency that we had feared,” said the Australian National University’s head of international security and intelligence studies John Blaxland.

“From the Australian point of view we can be more forthright (when dealing with China) because you have greater confidence that the United States is not walking away.”

Nevertheless, Turnbull is expected to exercise caution on just how far he can back an unpredictable US president.

James Laurenceson from the Australia-China relations institute at Sydney’s University of Technology, said Turnbull would be receptive to Trump, “but at the same time he will always have in the back of his mind that Australia’s economic interests are well and truly tied up in China”.

“It doesn’t mean that we won’t criticize China or shy away from that, but it will be factored in to it, in perhaps a way that it’s not factored into US decision making,” he added. – Rappler.com