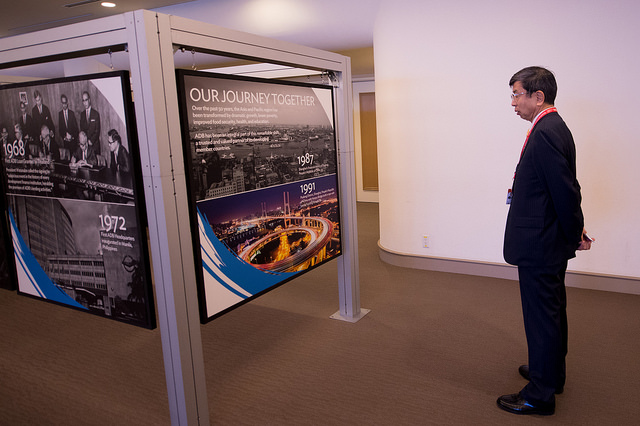 YOKOHAMA, Japan – Development projects in the region are among those that would be severely affected if geopolitical tensions are not settled, the Asian Development Bank (ADB) warned on Thursday, May 4.

Asked how the region’s rising geopolitical tensions could affect projects by the ADB, the bank’s president Takehiko Nakao said it was crucial to keep stability to ensure success.

“I don’t want to mention each by each, but the reason Asia has been succesful to achieve development in the past 50 years is because Asia has gained more stability and more geopolitical security over the years,” he said.

“So I’ll say that we now enjoy a much better place in Asia. Although there are many challenges, if we cannot keep this stability and safety, we will lose much.”

Nakao made the statement in this port city, where the 50th annual meeting is taking place. ADB, based in Manila, is dedicated to reducing poverty in Asia and the Pacific. In 2016, ADB assistance totaled $31.7 billion, including $14 billion in cofinancing.

Tensions have soared in the region in recent weeks in the wake of a series of North Korean missile tests and tough rhetoric from Washington on the isolated nation’s rogue weapons program.

Washington has deployed an aircraft carrier strike group to the Korean peninsula amid signs the North could be preparing for a 6th nuclear test, and US officials have said all options were on the table.

At the ASEAN Summit in Manila last week, foreign ministers released a statement, wherein it expressed “grave concern over the escalation of tension in the Korean Peninsula.”

“ASEAN is mindful that instability in the Korean Peninsula will have serious impact to the region and beyond,” it said. It also urged “all parties concerned” to “exercise self-restraint in order to de-escalate the tension.”

The competing claims in the South China Sea (West Philippine Sea in the Philippines) also add to the tension. China and Taiwan both claim nearly all of the sea, while Vietnam, the Philippines, Malaysia, and Brunei each have overlapping claims to parts of it. China has also continued its militarization of disputed areas in the sea.

Learn from the past

Nakao said Southeast Asian countries have had their own struggles in past decades, such as dictatorships in the Philippines and Indonesia, the Vietnam War, and the Cambodian genocide, but that the region’s recent stability has paved the way for development.

He said it is critical that the region learn from past mistakes in order to avoid future conflicts.

“Leaders of Asia, and its people, should make utmost efforts to keep stability in the region. I hope we have the wisdom of doing that,” he said.

He admitted that “we cannot totally remove or resolve different issues,” given the region’s diversity, but emphasized that “how to manage these issues are important.”

“We should look at the long term benefit from stability – that’s a lesson we learned from history.” – Rappler.com