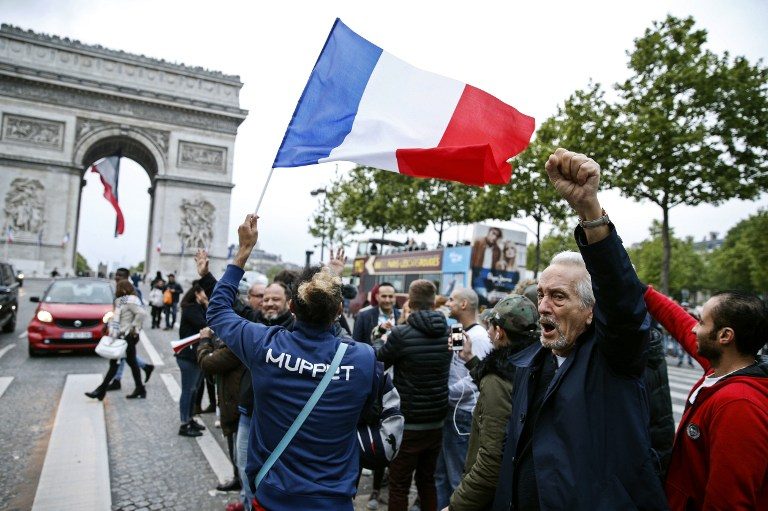 Chancellor Angela Merkel had emphatically thrown her support behind Macron against his far-right, anti-EU challenger Marine Le Pen, aware that the very existence of the European Union was at stake in the vote.

Minutes after Macron’s win, her spokesman Steffen Seibert underlined the message, writing on Twitter: “Congratulations, @EmmanuelMacron. Your victory is a victory for a strong and united Europe and for French-German friendship.”

Macron shares Merkel’s commitment to the bloc, which has been deeply shaken by Britain’s decision to quit.

The president-in-waiting, who positions himself as a centrist, has also campaigned on the type of sweeping changes to the French economy that Berlin had long championed and implemented more than a decade ago.

During a visit to Berlin in March when he met with Merkel, Macron said they discussed “my willingness to reform our labour market, our education system and to have a sensible fiscal consolidation, an investment package for our economy and to respect our commitments”.

Macron’s stance had led critics at home to portray him as Merkel’s puppet, with Le Pen hitting out before the polls that France would be governed by a woman after the vote – either herself or Merkel.

Merkel herself has rubbished such comparisons, stressing she has “absolutely no doubt that Emmanuel Macron will be a strong president”.

There are also signs from within her party and grand right-left coalition that it might not be just smooth sailing between the two.

Macron, a former economy minister in Francois Hollande’s government, wants to reform as well as bolster the EU.

He has said he is for setting up a separate budget for the eurozone, the 19 countries that use the common currency, and also proposes giving the eurozone its own parliament and finance minister.

“In Brussels the hopes are high. But it’s not so easy with the French-German duo. Berlin’s CDU circles (Merkel’s party) are skeptical about, if not deeply opposed to, Macron’s ideas,” said the Sueddeutsche Zeitung.

“For such wide-reaching reforms, it would be necessary to change the treaties, which in turn would require a referendum in France that carries with it uncertainties. That alone, in Finance Minister Wolfgang Schaeuble’s view, is unrealistic,” added the daily.

“Rather (Schaeuble) wants the EU nations to first reduce their debt before he is ready to look at creating about new competencies for the EU,” the newspaper said.

Besides direct friction with France over the EU reforms and budget issues, Merkel also face a rebellion from junior coalition partner Social Democratic Party (SPD) ahead of Germany’s own elections in September when she is seeking re-election.

Critics of the tough push for economic reforms have argued that such policies may have pushed some to the political extreme.

“Emmanuel Macron’s victory carries a task for us in Germany – because Macron must succeed,” said Gabriel, warning that “if he fails, Madam Le Pen will be president in 5 years’ time and the European project will go to the dogs”.

“We Germans must now help him. Those who are carrying out reforms must not be forced to follow strict austerity. Because it makes investments in growth impossible and produces not more but less jobs,” he warned.

“What has to stop is pointing fingers at the French for doing nothing and not giving them a millimeter of flexibility in their policies,” added Gabriel. – Rappler.com