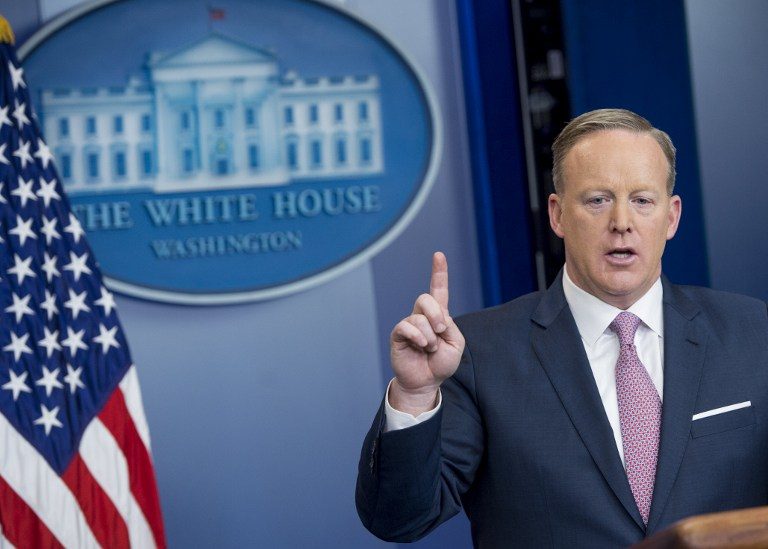 WASHINGTON, USA – US President Donald Trump’s shock dismissal of FBI chief James Comey this week not only unleashed a political firestorm in Washington – it also revealed the discordant sounds emanating from his communications team.

It was a complicated week for the Republican billionaire and his spokespeople – one that earned him a mountain of negative press. His aides conveyed a somewhat scattershot message, and Trump was reportedly angry.

He turned to Twitter, his communications method of choice, to issue a threat – the possible scrapping of the daily White House briefings.

“Maybe the best thing to do would be to cancel all future ‘press briefings’ and hand out written responses for the sake of accuracy???” he mused, admitting that his own people were struggling to keep up with his “active” presidency.

Trump then doubled down on the idea in an interview with Fox News, saying: “We just don’t have them, unless I have them every two weeks and I do them myself. We don’t have them. I think it’s a good idea.”

“You have a level of hostility that’s incredible and it’s very unfair,” he told the network in an interview.

But Trump’s critics said the hiccups in his media operation were his own fault, and questioned his willingness to impugn the credibility of his own team members, who the president said could not “stand at podium with perfect accuracy.”

“He needs to empower his people and spokespeople to understand what’s happening and be okay to legally communicate it to the world,” Josh Earnest, the former spokesman for Trump’s predecessor Barack Obama, told MSNBC.

Former White House communications director Jen Psaki said the week’s events had raised questions about whether Trump’s spokespeople “are prepared, and whether credibility and honesty are valued.”

“That is troubling not just in the United States but around the world,” Psaki, also a former State Department spokeswoman, told AFP.

Once the bombshell news of Comey’s firing broke late Tuesday, May 9, the White House was at pains to explain it – and its series of contradictory statements were quickly ridiculed.

Officials first said Comey had been dismissed over his handling of the investigation into Democratic presidential candidate Hillary Clinton’s use of private email while at the State Department.

Vice President Mike Pence said the move, which followed the recommendation of Attorney General Jeff Sessions and his deputy, was the “right decision at the right time.”

But Trump himself later made an about-face, admitting the decision was based at least partly on the fact that Comey was leading a probe into Russia’s alleged interference in the 2016 election and the Trump circle’s possible collusion with Moscow – a notion the president says was “fabricated” by Democrats.

He then went a step farther, warning Comey not to speak to the press about their meetings and suggesting there could be “tapes” of their private conversations in the Oval Office.

Spicer in the hot seat

The embattled White House spokesman Sean Spicer – who had been off for a few days on Naval Reserve duty – returned to the podium Friday, May 12, where he faced a grilling from reporters.

On whether Trump was surreptitiously recording Oval Office meetings, Spicer said he had “nothing further to add on that.” As for the tweet to Comey, Spicer said: “That’s not a threat. He simply stated a fact. The tweet speaks for itself.”

But the spokesman admitted he and his staff sometimes “don’t have an opportunity to get in to see him to get his full thinking.”

Earnest said that situation was untenable, and not Spicer’s fault.

“There are days when Sean Spicer can’t get into the Oval Office before he does the briefing,” said Earnest, who served as Obama’s primary spokesman for 3 years.

“That’s not Sean’s fault. That’s the fault of the president of the United States.”

Trump defended his surrogates in the interview with Fox News, calling Spicer a “wonderful human being” and deputy spokeswoman a “lovely young woman.”

The president has so far dismissed the notion that Spicer could be fired, lamenting that “he gets beat up” by the press corps.

But it is not only at the White House that Trump has communications problems.

At the State Department, regular daily briefings – which are as closely followed by the diplomatic corps as the White House press conferences – have not resumed since late January, save for a few exceptions in March.

However, for both Earnest and Psaki, the moment of truth will come when a national security crisis erupts.

“When there is a general national security crisis when the world is tuning in to the White House briefing wondering what the president thinks about it, and there may be a spokesperson standing behind the podium that hasn’t spoken to the president that day, that’s going to be a problem,” Earnest said.

Psaki added: “When that moment comes, the public and the global community will be looking to the president, the vice president, and the White House to speak with one voice.” – Rappler.com