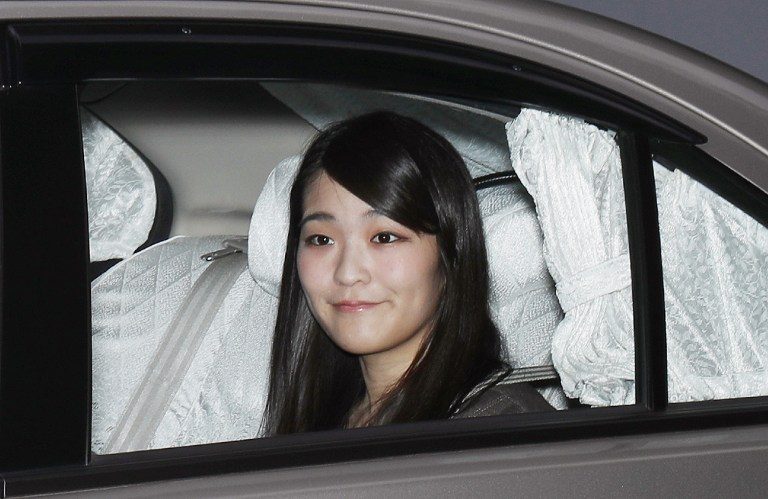 TOKYO, Japan (UPDATED) – Emperor Akihito’s granddaughter’s upcoming engagement to her college sweetheart, a commoner, will cost the princess her royal status in a move that highlights the male-dominated nature of Japan’s monarchy as it faces a potential succession crisis.

Public broadcaster NHK broke the story of Princess Mako’s engagement late Tuesday, May 16, sending the country into a tizzy with the news dominating television chat shows and newspaper coverage ahead of an expected official announcement in coming weeks.

Her reported fiancé, Kei Komuro, a telegenic 25-year-old commoner once named “Prince of the Sea” in a tourism promotion contest, briefly met journalists on Wednesday, May 17, but dodged questions on the engagement, saying he would only speak about it “when the time comes.”

Still, asked if he had spoken with the princess after the news emerged, Komuro – a graduate school student also working at a law firm – said: “I talked to her on the phone this morning.”

The national rejoicing, however, has been tempered by concerns over the future of the royal family as the country prepares for its first imperial abdication in two centuries amid an acute shortage of male heirs.

Mako, 25, is the eldest daughter of Prince Akishino, Akihito’s second son, and like all female imperial family members loses her royal status upon marriage to a commoner under a controversial law.

The law does not apply to male royals, with Akihito and both his sons marrying commoners, who are now part of the monarchy.

The news of the engagement has intensified a debate on whether the law should be changed so women born into the imperial family can continue in their royal roles.

That could help increase the number of potential male heirs to a monarchy that does not allow females to ascend the Chrysanthemum Throne.

Traditionalists, including Prime Minister Shinzo Abe, strenuously oppose such changes, even though Japan has occasionally been ruled by female sovereigns in past centuries.

“The good news again underscores the challenge faced by the imperial family,” the leading Asahi Shimbun said in a Thursday editorial.

“For now, there are 7 royal family members aged under 30, 6 of whom are women,” it stressed.

The only male under that age is Mako’s 10-year-old brother, Hisahito.

Before his birth in 2006, Japan wrestled with the possibility of allowing women to ascend the throne, a potential change which would have enabled Akihito’s granddaughter Princess Aiko to become empress.

But conservatives argued that such a move would sever what they claim is an unbroken 2,600-year-long line of male succession.

Takeo Hiranuma, a former economy and industry minister and an outspoken conservative, once denounced a panel that supported having a female monarch.

“Did the panel consider if Princess Aiko married a man with blue eyes after falling in love when studying abroad and the possibility that their first child would become emperor?”

The government is currently preparing legislation to allow Akihito, 83, to abdicate in favor of Naruhito, his eldest son. (READ: Japan plans to have new emperor in 2019 – media)

That will put his younger brother Akishino next in line, followed by Hisahito, Akishino’s son.

But after that there are no more eligible males, meaning the centuries-old succession would be broken if Hisahito fails to have a son in the future.

Some have suggested returning royal status to families who were stripped of it under a sweeping reform during the US occupation of Japan after World War II.

The conservative Sankei Shimbun daily stressed the importance of Japan’s “history of 125 generations of male succession” in a Thursday editorial.

“As the number of royals who support the emperor and empress is decreasing, we need to seriously think about measures to protect the imperial family,” it said, calling such a reinstatement an option. – Rappler.com