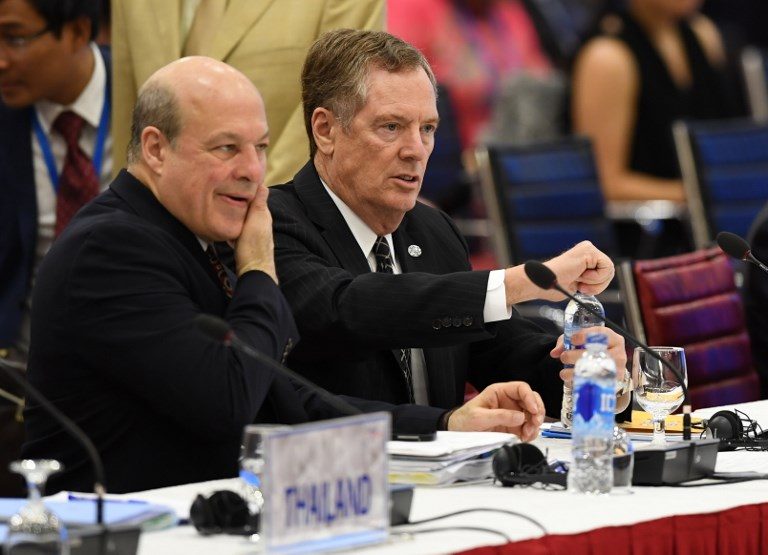 With his tough rhetoric on winning back American jobs, President Trump’s elevation to the White House has raised serious fears over a new protectionist era.

The US pulled out of the TPP in January, after Trump labeled it a “job killer.”

That dismayed the other 11 signatories – including Japan, Australia, Singapore and Vietnam – who saw it as a guarantor of regional free trade. (READ: Trans-Pacific Partnership ‘meaningless’ without U.S. – Japan PM)

Lighthizer met with his Japanese counterpart on Saturday.

The US and Japan “agreed to promote mutually beneficial trade, fight trade barriers and trade distorting measures,” according to a statement from Lighthizer and his Japanese counterpart Hiroshige Seko.

Japan is spearheading efforts to keep the TPP afloat.

The 11 remaining TPP nations are set to meet Sunday morning and are expected to commit to forging ahead with the pact without Washington, while leaving the door open for the US’ return.

Lighthizer, confirmed by the US Senate just 9 days ago, is due to meet with trade ministers from Australia, Canada, China, Mexico and Vietnam on Saturday and Sunday.

His meetings with Canada and Mexico are likely to be dominated by discussions about the North American Free Trade Agreement (NAFTA).

During his election campaign Trump vowed to scrap NAFTA but later backtracked, instead agreeing to renegotiation the 1994 pact. (READ: Trump agrees to NAFTA talks, no exit – for now)

Leaders from 21 APEC economies, including Trump, are set to meet in the Vietnamese beach town of Danang in November.

At the bloc’s last leaders’ meeting in November, the group vowed to fight protectionism.– Rappler.com