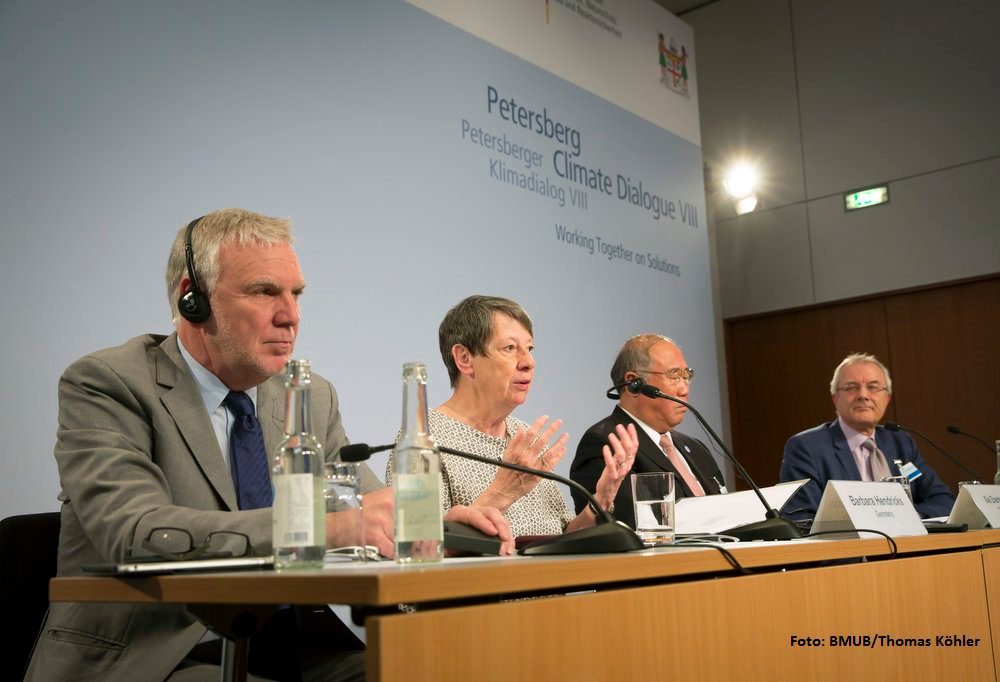 Facebook Twitter Copy URL
Copied
At the 8th Petersberg Climate Dialogue in Berlin, both Germany and China say the United States leaving the agreement would not benefit it economically

BERLIN, Germany – The uncertainty over the United States’ decision on whether it will withdraw from the historic Paris climate agreement looms large as ministers from 30 nations gather in the German capital for informal talks on international climate policy.

At the opening of the 8th Petersberg Climate Dialogue in Berlin, both Germany and China are encouraging the US to not leave the climate treaty, as the administration of President Donald Trump has announced a review of the US’ climate policies.

The world is facing “unpredictability” over the behavior of the United States, aid Barbara Hendricks, the German environment minister, during a press briefing Monday, May 22.

“I cannot see the US leaving the agreement would be of economic benefit to it,” Hendricks said.

Xie Zhenhua, China’s special representative for climate change, echoed Hendricks’ statement, saying that the US withdrawing from the accord will “not influence economic growth.”

“The transformation into a climate-friendly economy is already in full swing and unstoppable,” the German environment minister said.

She also said that the German government is reaching out to the US “in all levels,” citing conversations between her and Scott Pruitt of the US Environmental Protection Agency, German Foreign Minister Sigmar Gabriel and US Secretary of State Rex Tillerson, as well as between German Chancellor Angela Merkel and Trump.

“I believe this would be beneficial not only for the world’s climate, but also for the US itself,” she said.

The technical negotiations hosted by the UNFCCC in Bonn from May 8 to 18 resulted in frustration due to uncertainty of the American direction over the Paris Agreement. (READ: UN climate talks wrap up under threat of U.S. exodus)

At the Bonn negotiations, which focused on a nuts-and-bolts “rule book” to implement the deal, some delegates said it might be better to let the US break ranks than let it undermine the negotiations from the inside. Others said the rest of the world should better “ride out” Trump’s presidency and wait for the next administration to pursue America’s commitments under the deal.

Both top officials also reiterated their countries’s full support for the Paris Agreement, which was adopted in 2015 and came into force last November 2016. They said that whatever the US decides to do, the rest of the parties would stick to the accord.

“No country, no person can stop this trend,” toward climate governance, said Xie. “Countries should stick to it, instead of working away from it.”

“Should it (US) leave, it would be decisive for the rest of the world to stand united to protect our climate,” Hendricks said.

“What is crucial now is the US is going to make a decision, hopefully, in its best interest, and in the best interest of the world,” she said.

“Only those countries working with the international community will have their voices heard when the rules for the future will be written,” Hendricks added.

The Petersberg Climate Dialogue is an annual meeting hosted by the German government since 2010, as a venue for countries to “exchange experiences on international climate policy” in an informal setting. This year, ministers from 30 countries, plus delegates from the UNFCCC and other climate groups, are present. The Philippines last participated in the dialogue in 2015.

The 2017 edition of the dialogue is being held as Fiji prepares for its presidency of the UN Climate Change Conference to be held in Bonn in November – the first time a small island state will lead the global climate conference – and with Germany handling the presidency of the G20.

It also takes place as the parties to the Paris Agreement prepare for the setting up of the rule book that will guide its implementation, which they target to be done in the next climate conference in 2018, scheduled to be held in Poland. – with reports from Agence France-Presse/Rappler.com