U.S. says it stands with PH in ‘heartbreaking’ fight in Marawi 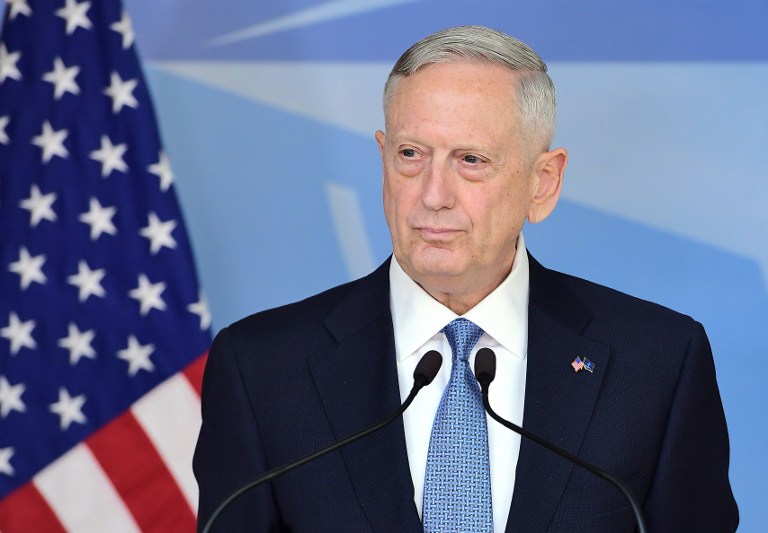 SINGAPORE – In the most concrete statement of support for the Philippines since the election of President Donald Trump, US Defense Secretary James Mattis expressed empathy over the attacks in Marawi – and reassured America would back its longtime ally.

Mattis made the statements on Saturday, June 3, at the Shangri-La Dialogue here, the region’s largest security and defense summit.

“This heartbreaking attack we are observing right now in a city in Mindanao, reminds us that terrorists intentionally make battlefields where the innocent live. These are also humanitarian fields as we know, and we must all devote ourselves to ensuring a stable environment in which violent extremist organizations wither and die, not our innocent citizens,” he said.

“I know I speak for all of us in this room today, that we stand with the Philippines in the fight they are currently engaged in.”

Mattis also said the events in Mindanao were a prime example of the spreading threat of radical Islamic terrorism in the region.

“We Americans stand in sympathy and support for those whose lives have been brutalized by these criminals.

The retired general then outlined its current assistance to the Philippines, thanking the Philippine government in the process, for allowing the United States to assist its troops – a subtle reaching out to Philippine President Rodrigo Duterte.

“We are helping to train and vitally assist the Philippine forces in their fight against violent extremist organizations in the south and we all owe that support to the Philippine government,” he said. “We also continue to support the modernization of the Philippine armed forces to address the country’s security challenges.”

“During this challenging fight against the terrorists, we will stand with the people of the Philippines, and we will continue to uphold our commitment to the Philippines under the Mutual Defense Treaty.”

Mattis made the statements despite recent anti-American pronouncements by Duterte, including a promise to cancel joint bilateral excercises with the US, and to abrogate treaties like the 2014 Enhanced Defense Cooperation Agreement and the 1999 Visiting Forces Agreement. Duterte has also expressed his desire to see US military personnel leave the Philippines.

Duterte has been personally invited by US President Donald Trump to visit the United States, an invite he has yet to accept.

All eyes on Marawi

Clashes between the military and local terrorist groups Abu Sayyaf and the Maute Group, erupted in the capital of Lanao del Sur province on Tuesday, May 23. This, after the military moved to hunt down Abu Sayyaf leader Isnilon Hapilon, who had been spotted in the city. (READ: Marawi Clash: Special coverage)

The military said the raid served to foil a terror plan to seize Marawi City. Ongoing fighting has claimed the lives of military, rebels, and civilians, and triggered Duterte to declare martial law in Mindanao.

Marawi has been mentioned several times in this gathering of ministers and defense and security experts. A day earlier, on Friday, Australian Prime Minister Malcolm Turnbull, in his keynote address, also pointed to the clashes as a sign of terrorists’ shifting focus toward Southeast Asia.

“Islamist terrorist organizations, including Al-Qaeda and ISIL, are very active in our region as recently demonstrated by the bombing in Jakarta and the large-scale attacks in Mindanao last week,” he said.

Like the United States, Australia reiterated the urgent need to work together, given the growing threat of terrorism.

“As ISIL’s so called caliphate is destroyed in Syria and Iraq, more fighters will seek to return to our region – battle hardened and trained. And just as the terrorists’ networks are transnational, so must be our collaboration – and nowhere more so in the sharing of intelligence,” he said.

“To that end, Australia will continue to work with our friends in the region and beyond. This means joining international coalition efforts to defeat Islamist terrorism at its source. And working together to stem the flow of foreign fighters to conflict zones and manage the threat from those who return.”

Mattis also reiterated the need “to defeat extremist organization wherever they attempt to establish roots.”

“Together we must act now to prevent this threat from growing, otherwise it will place long-term regional security at risk, and stun regional economic dynamism. We need only look at the chaos and the violence that our friends in the Middle East are contending with to see why we must swiftly and jointly address threats to our region.” – Rappler.com