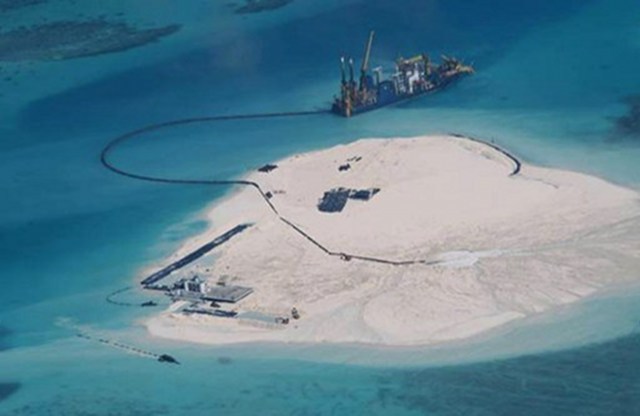 SINGAPORE – The message was clear: there is no room for China’s aggressiveness in the Asia-Pacific region.

Several defense ministers and leaders emphasized this at the Shangri-La Dialogue, the region’s most important security summit. China decided not to send a ministerial official to the summit this year.

US Defense Secretary James Mattis on Saturday, June 3, said the US would “not accept Chinese actions that impinge on the interests of the international community, undermining the rules-based order” that has benefited the region.

He did not hold back as he slammed China’s aggressive actions in disputed territories.

“The scope and effect of China’s construction activities in the South China Sea differ from those of other countries in several key ways. This includes the nature of its militarization, China’s blatant disregard for international law, its contempt for other nations’ interests, and its efforts to dismiss non-adversarial resolution of issues,” Mattis said.

“We oppose countries militarizing artificial islands and enforcing excessive maritime claims unsupported by maritime law. We cannot and will not accept unilateral, coercive changes in the status quo,” he added.

Australian Prime Minister Malcolm Turnbull also reminded China to follow the rules-based structure of the region that has kept it stable and peaceful, and warned China against bullying countries in the region.

“A coercive China would find its neighbors resenting demands they cede their autonomy and strategic space, and look to counterweight Beijing’s power by bolstering alliances and partnerships, between themselves and especially with the United States,” he said.

“Maintaining the rule of law in our region, respecting the sovereignty of nations large and small is the to continued peace and stability,” Turnbull added.

Inada specifically mentioned the historic Hague ruling favoring the Philippines in its dispute with China.

“Despite the fact that this award is binding on both parties, the construction of outposts in the South China Sea and their use for military purposes continues,” she said. “I am deeply concerned about the situation.”

Inada added, “The international community has an enormous stake in ensuring freedom of navigation and overflight in the South China Sea.”

Senior Colonel Zhou Bo, Director of the Security Cooperation Center of China’s National Defense Ministry, said the accusations are only to “smear China’s reputation.” He said US ships in Chinese territory are not considered as militarization, but is considered so when it is China.

Zhou added that the land reclamation was not militarization, and is “the only way for China to have its own legitimate self-defense.”

He also said China has “never threatened to use force on anybody,” and in fact violence in the South China Sea was initiated by other countries – like the Filipino coastguard who shot a Taiwanese fisherman. “China is not short of self-restraint or good will.”

He added, “China’s relationship with the Philippines under President Duterte has very much improved compared to his predecessor.”

China has been turning reefs and shoals in areas of the sea claimed by the Philippines and other nations into artificial islands, and installing military facilities there.

ASEAN members Vietnam, Malaysia, and Brunei also claim parts of the sea, but China insists it has sovereign rights over nearly all of it, even waters approaching its neighbors’ coasts.

The administration of former president Benigno Aquino III filed a case at a UN-backed tribunal asking it to reject China’s claims and artificial island building. The tribunal last year ruled largely in the Philippines’ favor.

The ruling was made under a new Philippine president, Rodrigo Duterte, who favors closer ties with China and a different approach to the country’s dispute with the regional giant.

Duterte steadfastly refused to use the verdict to pressure China, instead pursuing warmer relations in exchange for billions of dollars’ worth of trade and grants.

The Philippine president also drew criticism from analysts for the chairman’s statement at the end of the ASEAN Summit in April.  The statement, which is influenced by the current ASEAN chair, evaded China’s island-building activities in the South China Sea, and the Philippines’ legal victory against China. The statement is meant to reflect the views of all ASEAN leaders.

But Paul Evans, a professor at the Institute of Asian Research at the University of British Columbia, said it is not necessarily a bad thing that the Philippines is attempting to find a solution with China bilaterally.

“I think that President Duterte and the leaders in the Philippines have been smarter than most in understanding what the PCA (Permanent Court of Arbitration) ruling is really about,” he told Rappler.

“It was a statement of a group of lawyers, but it was not a statement about the balance of forces in the region, and the necessity whatever the rule, for living with China and finding ways to make some accommodations, to find areas of compromise where China and the Philippines can manage things.”

He added, “I think it’s a recognition that this is fundamentally a question of politics, not of law.”

Evans said he understood the approach ASEAN has taken towards China so far.

“Southeast Asia understood this is not a moralist game of good guys and bad guys, right and wrong. That’s one dimension of it. But it’s also about how you accommodate others who see things differently when they’re big and powerful,” he said.

But Evans also said Duterte – who has made anti-American pronouncements since he has been elected into office – cannot just recalibrate towards China and shun the United States, although the US must also prove its commitment to the region.

“He has to Iive with the United States, and shows various ways of doing that. I think the test is going to be how far America wants to stay with its attitudes of freedom, human rights, and democracy, and how far they’re going to play power politics.”

Mattis too, although he was stern in his pronouncements on China, said “conflict is not inevitable” between the US and the superpower.

“In areas where we disagree, we will seek to manage competition responsibly because we recognize how important US-China relations are for the stability of Asia-Pacific,” he said.

China was not represented at the summit by a minister, but promised organizers that it would send a delegation next year, said Dr John Chipman, Director-General and Chief Executive of summit organizer International Institute of Strategic Studies.

Chipman said China could not send an official because the People Liberation Army (PLA) is in the middle of an intense and wide-ranging military reform process. – Rappler.com