Jun 10, 2017 8:09 AM PHT
Agence France-Presse
Facebook Twitter Copy URL
Copied
British police also appeal to the public for any information on the pink-colored ceramic kitchen knives the attackers used in the stabbing spree 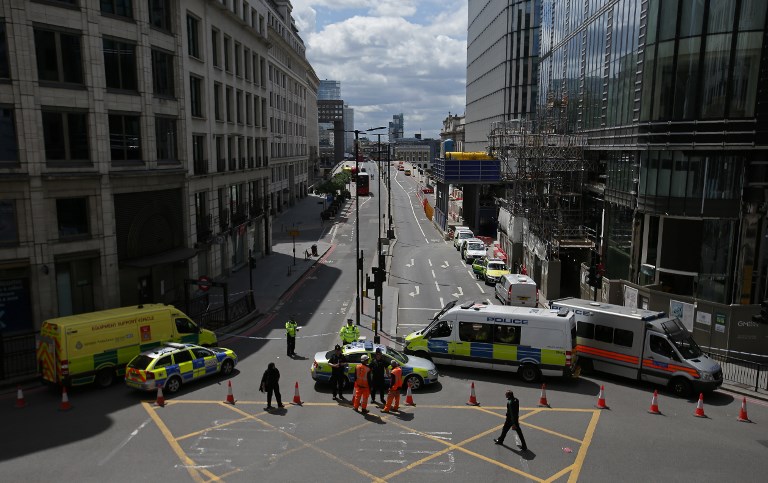 LONDON, United Kingdom – The assailants behind a terror attack in London last week had also prepared a stash of Molotov cocktails and initially tried to hire a truck rather than a van to mow down pedestrians, British police said on Saturday, June 10.

In a statement, the Metropolitan Police said forensic officers examining the white rental van found “13 wine bottles with rags wrapped around them and believed to be filled with a flammable liquid,” as well as two blowtorches.

The 3 attackers struck pedestrians with the van and then went on a stabbing spree wearing fake suicide vests last Saturday in the London Bridge area, a popular nightlife district.

Police also said Butt had tried to hire a 7.5-tonne lorry hours before carrying out the attack, but was turned down because the payment failed.

“Because of the fact his payment method failed he couldn’t get hold of that lorry,” Counter-Terrorism Command chief Dean Haydon told reporters.

“My view at the moment is that he then went to plan B and ended up hiring the van instead,” Haydon said.

“When I come back to Butt trying to get hold of a 7.5 tonne lorry – the effect could have been even worse.”

Haydon went on to say that “it’s feasible when you look at their actions, they were still fairly close to the van, there is a possibility they could have come back to the van.

“Was there a plan B that, after they had stabbed individuals, were they then planning to come back to the van and ignite the Molotov cocktails and that was a secondary attack? We don’t know – I can only surmise.”

Trucks have been used in a string of terror attacks in Europe over the past year.

Last July, a 31-year-old Tunisian extremist rammed a 19-tonne truck through a crowd celebrating Bastille Day in the French Riviera city of Nice, killing 86 people and injuring more than 400.

On December 19, a 24-year-old Tunisian ploughed a truck through a Christmas market in Berlin, killing 11 and wounding dozens.

And on March 22 this year, 5 people were killed when a man rammed his car into pedestrians on Westminster Bridge in London before stabbing a police officer outside parliament.

Police on Friday also released pictures of one of the pink-colored 12-inch ceramic kitchen knives used by the attackers, as they appealed to the public for any information.

“We need to know more about these unusual knives. Where are they from? Where might the attackers have bought them from?” police said.

They believe one of the properties they searched in the east London borough of Barking was the attackers’ safe house, where they prepared the attack.

Officers searching the house found an English-language copy of the Koran “opened at a page describing martyrdom,” as well as bottles “smelling of petrol” and “a bottle of lighter fluid”.

Only 5 remain in custody after 13 were released without charge. – Rappler.com