Facebook Twitter Copy URL
Copied
'The Pride Center is a space where the diversity of our community can share stories, build relationships, learn, grow, create and heal together,' Program Director Lisa Putkey says

CALIFORNIA, USA – After a dim and damp spell, the sun blazed on June 1, naturally spotlighting a cottage near downtown San Mateo that is now home for new family.

That sultry Thursday, 1201 South El Camino Real flung its doors wide open as San Mateo County Pride Center, where individuals who identify as lesbian, gay, bisexual, transgender, questioning, intersex or two-spirit, their relatives, friends, and allies may visit, celebrate, support each other and access resources available in the county and beyond.

Finally, as program director Lisa Putkey exulted, residents don’t have to go to San Francisco to be themselves.

“The Pride Center is a space where the diversity of our community – regardless of age, gender, race, immigration status, income or abilities – can share stories, build relationships, learn, grow, create and heal together,” Putkey, an expert on peace and conflict resolution, enunciated at the opening ceremonies.

“Together we are powerful…have the ability to overcome hate and oppression as long as we are bold, take risks, stand in solidarity, centering the voices of the most harmed amongst us until each one of us is honored, seen, heard, valued and loved,” she added.

Perhaps knowing of a safe haven would adjust the numbers in a recent UCLA analysis of the 2010 US Census that found less than 2,000 same-sex couples living in San Mateo County, or 14th among the 58 districts. Meanwhile, a 2015 Gallup poll found that the San Francisco metropolitan area – covering San Mateo, Marin, Alameda and Contra Costa counties – leads the country with the highest concentration of people who identified as gay.

Daly City, home to the biggest percentage of Filipinos in any town in the continental United States, is in San Mateo County. The San Jose area, including Santa Clara and San Benito counties, ranked 47th.

It’s no accident that the BHRS Equity and Diversity Program is directed by University of the Philippines alum Dr. Jei Africa, one of the highest ranking Filipino American county employees and a champion of gay rights. 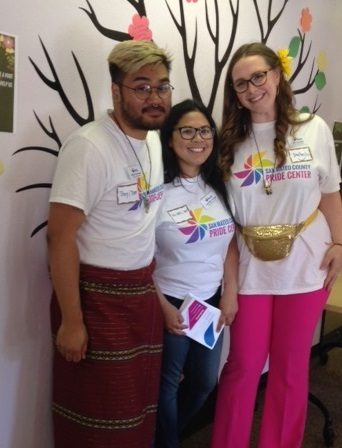 The Center is “unique because it brings together the clinical services for behavioral health and recovery and provides services for the community… and it also features an online resource,” noted Africa, who sits on the LGBTQ Commission, co-founded the Filipino Mental Health Initiative, and directs clinical policies of ALLICE Alliance for Community Empowerment.

Counseling coordinator Gilbert Gammad and administrative specialist Llowellyn Sunga boost Filipino American representation at the center. Gammad, born in Berkeley to a military dad originally from Cagayan Valley in the Philippines, swaddled himself in a malong, the tubular attire worn by royalty among the Maranao of Mindanao.

“Pilipino ka ba? (Are you Filipino?)” the youth peer support counselor asked while I admired his wrap and nodded in confirmation. Woven from cotton in often geometric patterns, the malong kindles creativity.  It can be worn as a skirt, shawl, top, sash or turban. In my home, it dazzles any surface it drapes – couch, table, bed, wall, window, my torso. On a community advocate of Filipino descent at a historic event headlined by top county and city officials to honor an undeserved population, Gammad’s gesture boldly declared his identity.

“Oo, bakla ako (Yes, I am gay),” he volunteered, embracing the term his new acquaintance informed him is a pejorative in many places, in fact the Tagalog counterpart of the “f” word for non-heterosexual folks. Turning the table on bigots, reclaiming the term and taking away its power to disparage, I’m reminded of how “queer” transitioned from insult to affirmation.

“I never thought the day would come that I would see the gay pride flag flying on El Camino Real,” said Gordon, who had represented District 3 on the Board of Supervisors. “This is where I was raised, at a time and a place where — if you were gay — the only role that you had was in the closet. We’ve come a long way in 69 years.”

In 1970 Gay Pride marches began in key cities throughout the country, including San Francisco. While San Mateo has yet to lead its parade, the county amped up its welcome in 2014 by convening the LGBTQ Commission, a pioneer body for its independence from other county human services.

In 2012 the county staged its first Pride Celebration in Central Park in downtown San Mateo. The fifth annual free event, dubbed “Still We Rise,” unfolded on Saturday, June 10, at the same site, offering a learning experience amid food, music and fun.  It was for everyone to welcome – not merely tolerate – diversity and inclusiveness. – Rappler.com

For more information on the Pride Center, call 650-591-0133 or visit info@sanmateopride.org.