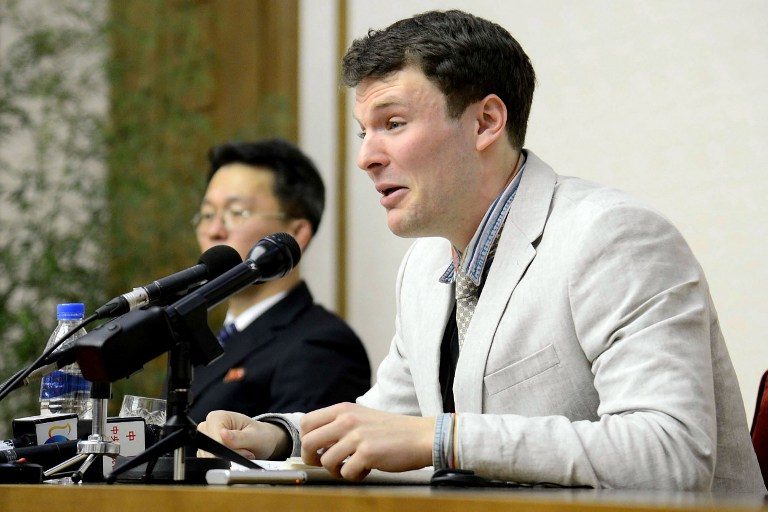 CHICAGO, USA – Otto Warmbier, the US student released in a coma last week after nearly 18 months in detention in North Korea, died on Monday, June 19, leading President Donald Trump to decry the “brutal regime” in Pyongyang.

The 22-year-old was medically evacuated to the United States on Tuesday last week (June 13), suffering from severe brain damage. He died 6 days later surrounded by relatives in his home town of Cincinnati, Ohio.

“The awful torturous mistreatment our son received at the hands of the North Koreans ensured that no other outcome was possible,” the family said in a statement announcing Otto’s death.

The young man was on a tourist trip when he was arrested and sentenced in March last year to 15 years hard labor for stealing a political poster from a North Korean hotel, a punishment the United States decried as far out of proportion to his alleged crime.

Trump lashed out at Pyongyang following news of his death, while voicing compassion for his family.

“It’s a brutal regime,” he said during a White House event. “Bad things happened but at least we got him home to his parents.”

In a separate statement, Trump said, “Otto’s fate deepens my Administration’s determination to prevent such tragedies from befalling innocent people at the hands of regimes that do not respect the rule of law or basic human decency.”

“The United States once again condemns the brutality of the North Korean regime as we mourn its latest victim.”

Doctors last week revealed that Otto had suffered severe neurological injuries, and described him as being in a state of “unresponsive wakefulness,” opening his eyes and blinking, but showing no signs of understanding language or of being aware of his surroundings.

His family said Monday that he first appeared anguished when he first arrived home, but died “at peace.”

Kim Jong-Un’s regime said Warmbier fell into a coma soon after he was sentenced last year, claiming the college student had contracted botulism and been given a sleeping pill.

Medical tests carried out last week in the United States offered no conclusive evidence as to the cause of his neurological injuries, and no evidence of a prior botulism infection. Warmbier’s doctors said he had suffered extensive tissue loss in all regions of his brain, but showed no signs of physical trauma.

They said Warmbier’s severe brain injury was most likely – given his young age – to have been caused by cardiopulmonary arrest cutting the blood supply to the brain.

Warmbier’s release came amid mounting tensions with Washington following a series of missile tests by Pyongyang, focusing attention on an arms buildup that Pentagon chief Jim Mattis has dubbed “a clear and present danger to all.”

His father, Fred, lashed out at North Korea last week, telling a news conference, “there is no excuse for any civilized nation to have kept his condition secret and denied him top-notch medical care for so long.”

In their statement Monday, Otto’s family said they believed the young man had found a peace of sorts after being flown home.

“When Otto returned to Cincinnati late on June 13th he was unable to speak, unable to see and unable to react to verbal commands. He looked very uncomfortable – almost anguished,” they said.

“Although we would never hear his voice again, within a day the countenance of his face changed – he was at peace.  He was home and we believe he could sense that,” they added.

“We thank everyone around the world who has kept him and our family in their thoughts and prayers. We are at peace and at home too.”

Three more US citizens are currently being held by North Korea, including two men who taught at a Pyongyang university funded by overseas Christian groups, and a Korean-American pastor who was accused of espionage for the South. – Rappler.com