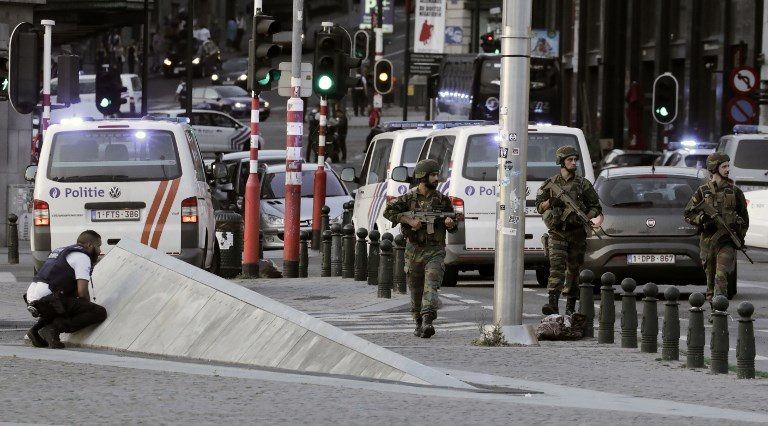 BRUSSELS, Belgium – Belgian soldiers shot a terror suspect after an explosion rocked the central train station in Brussels on Tuesday, June 20, in the latest attack to hit Europe.

Witnesses said the suspect shouted “Allahu Akbar” (God is Greatest) before causing the blast, with local media saying the individual had activated an explosive belt.

Authorities reported no casualties, apart from the attacker who was was killed in the confrontation.

Crying passengers were evacuated from the station as the city that hosts the EU’s headquarters was struck by a new attack just over a year after suicide bombers hit the city’s airport and metro system.

The blast in Belgium comes a day after a man mowed down Muslims near a mosque in London, and a radical Islamist on a terror watchlist rammed a car laden with weapons into a police vehicle in Paris.

Brussels has been on high alert since suicide bombers struck the city’s airport and metro in March 2016, killing 32 people and injuring hundreds more.

The Islamic State (ISIS) group claimed the attacks, which were carried out by the same Brussels-based cell behind the November 2016 Paris attacks that killed 130 people.

Van Der Sypt said that at about 1830 GMT there has was a “small explosion at Central Station here in Brussels.”

“The suspect has been neutralized by the military that were present at the scene immediately after the explosion,” the spokesman said. “He is dead.”

There were no other casualties, Van Der Sypt said.

The incident happened well after rush hour, but hundreds of passengers were still evacuated from one of Belgium’s busiest stations. The nearby Grand Place, a major tourist destination, was also evacuated.

“I went down to the mezzanine level, someone was shouting. Then he cried ‘Allahu Akbar’, and he blew up a wheeled suitcase,” Nicolas Van Herringer, a railway sorting agent, told reporters.

“I was behind a wall when it exploded. I went down and alerted my colleagues to evacuate everyone. He (the suspect) was still around but after that we didn’t see him.”

Van Herrewegen added: “It wasn’t exactly a big explosion but the impact was pretty big. People were running away.”

He described the suspect as well-built and tanned with short hair, wearing a white shirt and jeans.

“I saw that he had something on him because I could see wires emerging, so it may have been a suicide vest,” Van Herrewegen said.

Prosecutors told Libre Belgique that the individual was carrying a backpack and an explosive belt, before being shot down.

The report said the suspect activated the belt once the soldier’s attention turned to him.

About an hour after the events, the situation was “under control”, the federal crisis centre said in a tweet.

It said it was keeping the country’s terror alert at level 3, the second highest.

“The center of Brussels is calm,” mayor Philippe Close said in a tweet.

Belgian Prime Minister Charles Michel hailed the “courage” of security forces and said he would chair a security council meeting on Wednesday morning.

Gare Centrale is largely underground, located in the heart of Brussels, a few blocks from the Grand Place and the Manneken Pis statue.

It appeared that the suspect was neutralized by soldiers who have been deployed at railway stations and landmark buildings since the aftermath of the Paris terror attacks when a link to Brussels was first established.

The country’s law enforcement agencies and intelligence services came under intense scrutiny after the attacks for apparently missing a series of leads after the Paris attacks that could have led to the Brussels bombers. – Rappler.com