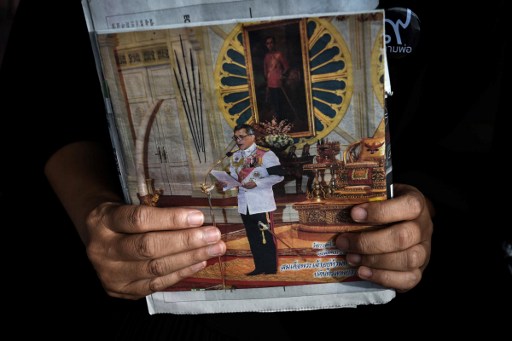 BANGKOK, Thailand – Thai authorities on Saturday, June 24 detained an activist attempting to mark the 1932 revolution that ended absolute monarchy, police said, a historical event that has become increasingly taboo under an ultra-royalist junta.

The bloodless revolution on June 24, 1932 launched parliamentary democracy in Thailand, but the decades since have been punctuated by frequent military coups, including the putsch that ushered in the current army-led government.

In recent years small groups of democracy activists have gathered each anniversary to lay flowers on a small bronze plaque marking the spot where revolutionaries proclaimed the end of absolute monarchy in a fiery speech lambasting the king.

But the 30-inch plaque was mysteriously removed from Bangkok’s Royal Plaza this April and replaced with a new marker bearing a royalist message.

Authorities have not offered an explanation for the incident and earlier this month police banned people from gathering around the memorial on the revolution’s anniversary.

On Saturday an activist, Ekachai Hongkangwan, was taken to a Bangkok military base for “attitude adjustment” after he tried to lay a replica of the original plaque on top of the new one, said Phanurat Lukboon, deputy Metropolitan Police commissioner.

“He is now being held at the 11th army circle,” the officer told AFP, referring to an army barracks.

The drama around the democracy plaque comes as royalist voices are ascendant in Thailand, which is under the grip of a junta that grabbed power in 2014.

Use of the draconian royal defamation law has surged under their rule, with offenders handed decades-long jail sentences for criticism often posted on social media.

Earlier this month a Thai man was sentenced to 35 years in prison for Facebook posts deemed insulting to the royal family.

It is also a tense time for Thailand’s monarchy, which underwent its first succession in 70 years after the passing of beloved King Bhumibol Adulyadej last October.

His son, 64-year-old Maha Vajiralongkorn, took the throne late last year but has yet to achieve the same popularity as his father.

All Thailand-based media must heavily self-censor when reporting on the monarchy to avoid violating the lese majeste law. – Rappler.com