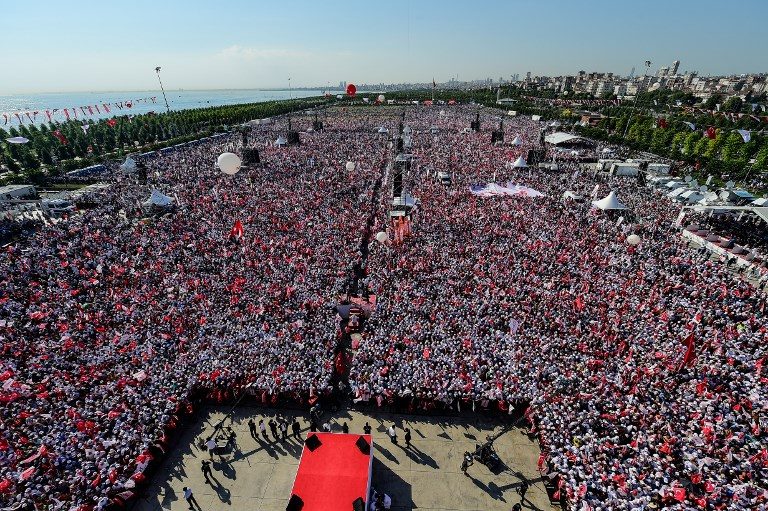 ISTANBUL, Turkey – Tens of thousands of Turkish opposition supporters on Sunday, July 9, massed in Istanbul to mark the end of a nearly month-long march protesting alleged injustices under President Recep Tayyip Erdogan, in a rare challenge to Turkey’s powerful leader.

A sea of people filled the vast shoreside square in Maltepe on the Asian side of Istanbul for the rally celebrating the culmination of a 450-kilometer (280-mile) “justice march” from Ankara to Istanbul by Republican People’s Party (CHP) leader Kemal Kilicdaroglu.

The rally is by far the biggest by the opposition seen in Istanbul since the mass May-June 2013 demonstrations against Erdogan’s rule sparked by the planned redevelopment of Gezi Park in the city.

Kilicdaroglu began the 25-day trek to protest the arrest of one of his MPs and it rapidly grew into a major march protesting alleged injustice under the state of emergency imposed following last year’s July 15 failed coup.

“Nobody should think this march is the last one. It’s the first step!” Kilicdaroglu told the crowds who roared back with the cry “Justice!”

“Everyone should know very well that July 9 is a new step, a new history… a new birth,” he added.

Usually, only Erdogan himself can mobilize crowds on this scale with glitzy rallies and the president himself had in the past held mass meetings for supporters in the Maltepe meeting area.

The government has dismissed the march as a bothersome stunt while a riled Erdogan has accused Kilicdaroglu of siding with “terrorists” and the July 15 plotters.

But Turkish security forces did nothing to impede the march’s progress and 15,000 police officers were deployed to ensure safety at the rally.

CHP officials told AFP that the numbers at the rally could be as high as over two million but this could not be immediately confirmed.

The CHP leader reached the outskirts of Istanbul on Friday, July 7, and was joined by tens of thousands forming a vast file along the road despite blistering heat.

Kilicdaroglu had launched the march from Ankara after his party’s lawmaker Enis Berberoglu, a former journalist, was sentenced to 25 years in jail on charges of leaking classified information to a newspaper.

The rally ground is near Berberoglu’s prison in the Istanbul district of Maltepe.

Kilicdaroglu had said he wants no CHP insignia at the rally, only “Justice” slogans and pictures of modern Turkey’s founder Mustafa Kemal Ataturk.

The opposition chief has dressed every day modestly in a white shirt, dark trousers, with a hat to protect him from the sun. He rested at night in a caravan.

At the rally the huge stage, flanked by pictures of Ataturk and the Turkish flag, had only a single word printed on its canopy – “Adalet” (Justice) – in giant letters.

‘We marched for justice’

About 50,000 people have been arrested under Turkey’s state of emergency imposed after last July’s failed coup and another 100,000 have lost their jobs, including teachers, judges, soldiers, and police officers.

“We marched because the judiciary is under a political monopoly,” he added.

Kilicdaroglu has strongly condemned the failed coup bid – blamed on US-based preacher Fethullah Gulen, who denies the charges – but has been bitterly critical of the scope of the state of emergency.

In the latest crackdown, Turkish police on Wednesday, July 5, detained Amnesty International’s Turkey director and other activists on charges of membership in a terror group sparking a new uproar among rights advocates.

Kilicdaroglu said he was against both a “one-man regime” and Gulen.

Turkish police this week detained 6 suspected members of the Islamic State extremist group planning a bomb attack on the march. But the CHP said it was a routine operation, and was not related to the justice march. – Rappler.com