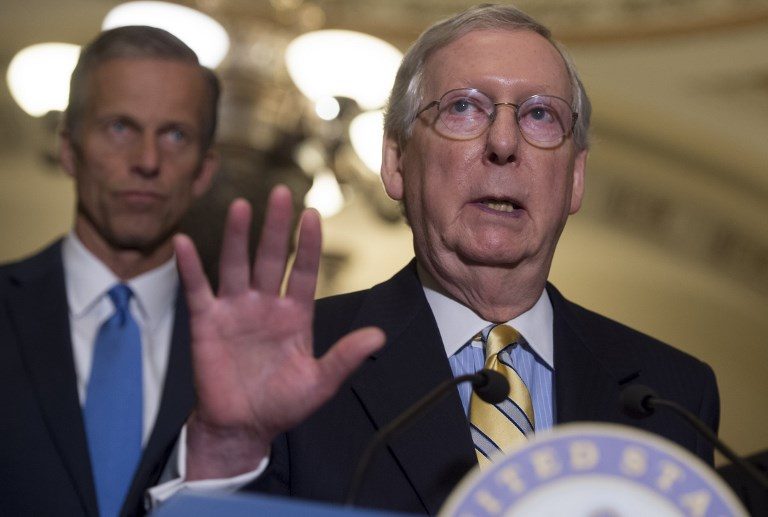 Facebook Twitter Copy URL
Copied
(UPDATED) With Democrats united in opposition, Senate Majority Leader Mitch McConnell needs support from at least 50 out of 52 Republicans to pass the measure in the 100-member chamber

The new Senate bill is intended to woo lawmakers from rival conservative and moderate Republican factions, and reassure those who fear that repealing Barack Obama’s Affordable Care Act – a longstanding goal for the party – could adversely impact millions of Americans.

With Democrats united in opposition, Senate Majority Leader Mitch McConnell needs support from at least 50 out of 52 Republicans to pass the measure in the 100-member chamber.

But shortly after the revamped bill’s release, two Republicans confirmed their opposition against it, while at least 5 more expressed deep concerns.

The test is whether leadership can convince those holdouts to get on board now in order to even begin debate on the bill.

It still includes plans to slash by more than $700 billion the Medicaid federal health care program for the poor and disabled, a move that Republican centrists fear could devastate millions of families.

But key changes include the provision of an extra $70 billion to stabilize the health insurance exchanges created under Obamacare, on top of the $112 billion earmarked under the previous version.

In another nod to moderates, the revised bill jettisons plans to repeal two taxes on wealthy Americans that help pay for Obamacare, and preserves a tax on health insurance executives.

That could free up about $230 billion to help contain health costs, supporters argue.

Portman said he still was not sure if he could support the bill. “We’ll see,” he told reporters.

Concessions to conservatives include giving states flexibility to let insurance companies offer cheap, no-frills plans alongside those that include certain health benefits mandated by Obamacare.

Some Republicans warn that such a move could end up abolishing protections for people with pre-existing conditions and send costs soaring for children and older insurance holders in the individual market.

Senator Ted Cruz emerged from a Republican closed-door meeting to declare that the bill “represents a tremendous improvement over the previous version.”

The conservative Cruz had been a critic of the earlier plan, but led the push to allow insurance companies to offer bare-bones plans.

In a sign of the delicate tug of war that McConnell faces, while Cruz hopped on board, moderate Senator Susan Collins announced she remained firmly opposed.

“I’m still deeply concerned” about the “hundreds of billions of dollars of cuts in the Medicaid program,” Collins told reporters.

Later in a tweet, she said she was prepared to work with Democrats “to fix flaws” in Obamacare.

Another senator being closely watched for her vote is Capito, whose state of West Virginia has a substantial portion of residents who rely on Medicaid.

Capito opposed the earlier version because it cut the program “too deeply.” On Thursday she said she continued to have “serious concerns about the Medicaid provisions” in the new bill.

With McConnell postponing the Senate’s August recess by two weeks to allow time to bridge internal policy differences, Trump used his bully pulpit Wednesday, July 12, to warn he would be “very angry” if Congress failed to replace large parts of Obamacare.

“I think it’s worse” than the previous bill, Paul told reporters, saying the new measure keeps Obamacare taxes, regulations and most of its subsidies.

McConnell has been criticized for crafting the initial bill in secret and rushing the process, leaving lawmakers with little time to analyze the legislation and consider changes.

Polls showed the previous version to be widely unpopular. An analysis by the non-profit Congressional Budget Office forecast that under the bill, ranks of the uninsured would swell by 22 million people by 2026 compared to current law.

McConnell wants to receive a new CBO score as early as next Monday, July 17, and hold a vote to begin debate on the bill next week.

“The Republican Trumpcare bill still slashes Medicaid. The cuts are every bit as draconian as they were in the previous version,” he said.

Two moderate senators have offered an alternative version but it remained unclear how much support it might earn. – Rappler.com