U.S. and Iran in tit-for-tat sanctions over missiles 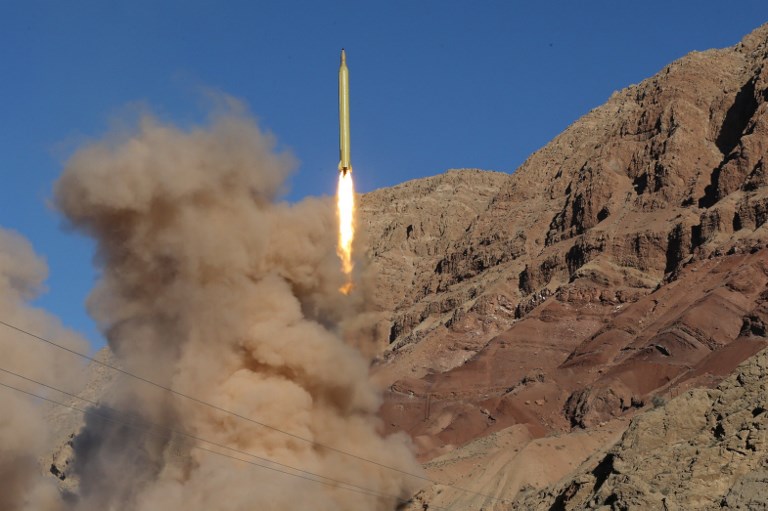 After the US announced its new sanctions, Iran hit back, calling them “worthless” and “illegal” and announcing its own sanctions “against American people and entities that have acted against the Iranian people and other Muslim peoples of the region.”

“The Americans… want to weaken the capabilities and strength of the Islamic regime,” said General Amir Ali Hajizadeh, who heads the Revolutionary Guard Corps’ aerospace wing and missile program.

“We propose reciprocal actions with a high cost.”

Iran’s parliament also voted to authorize extra funding for the missile program and the Revolutionary Guard’s foreign operations wing, the Quds Force, which Washington accuses of fomenting unrest across the region.

The heightened tensions came after President Donald Trump was forced to back off from a key campaign promise to withdraw from a 2015 nuclear accord with Tehran, which eased sanctions in return for limiting its ability to produce material for atomic weapons.

Trump had described it as “the worst deal ever” and accused Iran of continuing to back terrorism in the Middle East. But on Monday, July 17, the White House admitted that the Islamic republic was sticking to the nukes agreement.

It noted, however, that while Iran might be meeting its requirements on paper, it was “unquestionably in default of the spirit” of the accord.

In announcing the new sanctions against 18 individuals and entities in Iran, the State Department said it “remains deeply concerned about Iran’s malign activities across the Middle East which undermine regional stability, security, and prosperity.”

The Pentagon has also repeatedly voiced concern over a string of high-profile incidents in waters off Iran involving Iranian vessels.

It has accused the Revolutionary Guard of conducting risky maneuvers around US warships in the Gulf, some of which resulted in the Americans firing warning shots.

“These sanctions target procurement of advanced military hardware, such as fast attack boats and unmanned aerial vehicles, and send a strong signal that the United States cannot and will not tolerate Iran’s provocative and destabilizing behavior,” said Treasury Secretary Steven Mnuchin.

Washington is also concerned about the fate of Xiyue Wang, a 37-year-old Chinese-American researcher at Princeton University who was recently sentenced to 10 years in Iranian prison.

While the US complained about Iran’s defiance of the spirit of the nuclear accord, Iranian Foreign Minister Mohammad Javad Zarif said he would make his own complaints about US non-compliance when representatives of the five nuclear powers – Britain, China, France, Russia and the United States – plus Germany meet in Vienna on Friday to take stock of the deal.

Zarif accused the Trump administration of failing to lift sanctions in line with the deal, in an effort to “poison the international atmosphere.”

“I think the international community has read this very loud and clear and continues to deal with Iran without much attention to this theater which is being played,” the top Iranian diplomat added.

Zarif said he had no communication with Secretary of State Rex Tillerson, in stark contrast to his predecessor John Kerry, with whom Zarif negotiated the groundbreaking nuclear deal.

“It doesn’t mean there can’t be. The possibilities for engagement… have always been open,” said Zarif in New York, where he was attending a UN development forum.

He said he was willing to discuss Wang’s case “on humanitarian grounds,” but stressed that Iran’s courts were independent of the government.

Trump and his top security officials have always taken a tough line on Iran: his defense secretary, Jim Mattis, fought Iranian-backed militias during the US occupation of Iraq while serving as a Marine general, and memories are still fresh of Hezbollah’s attack on the Marine Corps barracks in Lebanon in 1983. – Rappler.com