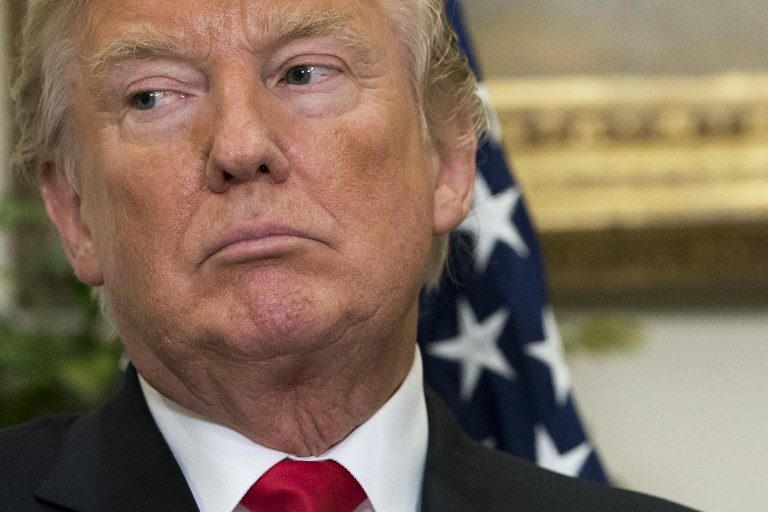 WASHINGTON DC, USA – Donald Trump hit the 6-month point of his turbulent presidency Thursday, July 20 in combative style – lashing out at his own attorney general over the probe into Russia’s alleged election meddling that has dogged him from day one.

Since taking office on January 20, Trump has been on a roller coaster ride, and the gut-wrenching twists and turns looked set to continue after Jeff Sessions vowed to stay on at the Justice Department despite a stinging public rebuke from the commander-in-chief.

Publicly abandoning an influential early supporter, the 71-year-old Trump suggested Sessions had betrayed him in stepping back from investigations into alleged Kremlin-Trump collusion – and said he wished he had never hired him.

“How do you take a job and then recuse yourself? If he would have recused himself before the job, I would have said, ‘Thanks, Jeff, but I’m not going to take you,'” Trump told The New York Times.

On Thursday, Sessions said he had no plans to resign in the wake of the blistering criticism.

“I have the honor of serving as attorney general. It is something that goes beyond any thought I would have ever had for myself,” the Republican former senator said.

“I plan to continue to do so as long as that is appropriate,” he added.

When asked how he could continue to work without the confidence of Trump, Sessions replied: “We are serving right now. The work we are doing today is the kind of work we intend to continue.”

“Clearly he has confidence in him or he would not be the attorney general,” she said.

Trump’s expansive remarks to The New York Times painted a picture of a president preoccupied by allegations against him – chief among them that his team may have colluded with Moscow to help tilt the election in his favor.

In the interview, he warned special counsel and former FBI director Robert Mueller that some Trump family finances should be off-limits to his wide-ranging investigation.

Asked if Mueller looking at finances unrelated to Russia would be a red line, Trump responded, “I would say yes.”

“I have no income from Russia. I don’t do business with Russia,” he added.

Sanders said that Trump had no current plans to fire Mueller – something that would spark a major political storm – but refused to rule it out completely.

The president “has no intention to do so at this time,” she said.

Trump’s first 6 months in the White House have been as chaotic and contentious as any for a new president in living memory.

Making good on a promise to shake up Washington, the Republican billionaire-turned-world leader has shattered norms at every turn, abandoning the usual presidential decorum and caution.

But his bold and unambiguous campaign promises remain unrealized, as he has struggled to turn word into legislative deed, most notably in enacting health care reform.

“It is tough. It’s a very narrow path, winding this way. You think you have it, and then you lose four on the other side because you gave. It is a brutal process,” he said.

“President Trump’s impact on the economy has been immediate, spurring job creation across the country,” the White House claimed.

“Just 6 months in office, President Trump has taken historic action to eliminate wasteful and costly regulations that have stood in the way of hardworking Americans.”

Trump also traveled across Washington to the Pentagon on Thursday to highlight another bright spot in his administration – military success in rolling back the Islamic State group.